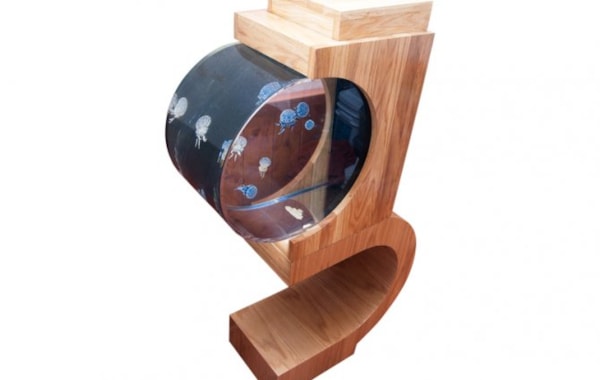 Jellyfish are incredibly soft. At the first jolt with something with a vague edge, they tear, rupture or puncture. Once torn, it’s a slow, one-way degradation to death.

Another obstacle is keeping them in the water column. Most jellies are pelagic, lifted about on ocean currents and carried upon whimsical tides. With insufficient flow, a jellyfish will plant itself face down into a dead spot, where it’ll rub against the glass or acrylic until eventually wearing down its soft, outer dermis.

This tank from Marine Ornamental Aquatics employs the best technique to swerve both these issues: a kreisel design and a lack of sharp edges. Kreisel translates as 'spinning top' in its native German, and it’s a design that has proven safe and reliable.

This explains the tank’s quirky look. That circular edge is functional, creating a rolling vortex of water that ensures the jellies never slump to the base.

The rear Perspex insert, housing the filter and other hardware, is arranged as an enormous grid, with a line of small holes at the base where the flow of water enters the tank, pushing along the floor until it hits and rides up the long, curved edge opposite. I’ve even noticed smaller vortices within the larger vortex. Instead of just the one continuous flow of water around the circular edge, there seem to be dozens of smaller flows, which stop most tiny particulates from settling.

So, how does the water get out of the main chamber and into the filter without sucking up jellyfish? The design is simple: that same rear Perspex plate acts as a strainer. The surface of the Perspex is littered with tiny holes, drawing water out over a vast surface area: even copepods seem to drift by without being sucked in. This combination of inflow and outflow leads to jellyfish gently tumbling in a region towards the outer two thirds of the tank, where they can be seen!

A JBL heater and MOA’s unique flow/counterflow filter system sits at the back of the tank. The filtration is encased in submersed acrylic housing and consists of two tubes connected sequentially. Water is pumped in to the bottom of the filter with a JBL ProFlow T500 pump through a precision hole and passes up through the first tube, consisting of mechanical foams top and bottom, sandwiching a considerable measure of carbon — you can add your choice of media.

The water then moves through a clear section bridging the chambers before passing down the second. This also has sponges top and bottom but is filled with Kaldness K1 media. Because of the downward flow of the water, this media is tumbling and in constant motion and is also fed from underneath by a flow of air from a JBL air pump hidden below the tank, resulting in extra oxygen and increased turbulence for the K1, bolstering its efficiency. 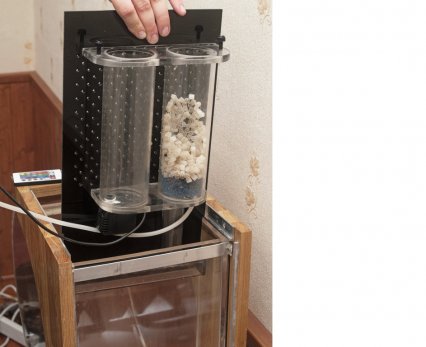 There’s an easy filter cartridge removal and replacement system, and the carbon insert can be changed in under a minute.

The surround contains no melamine, instead being made from 100% European oak — so it’s not going to puff up like a soggy Weetabix at the first hint of damp. Combined with the 10mm acrylic of the tank (hand formed, hand polished and UK constructed), this is one of the most solid constructions I’ve worked with.The tank doesn’t come with the novel stand underneath; it can be purchased separately. It can sit facing either direction on the stand, and the whole thing is very stable.

In its basic form, the tank comes as a tabletop model, with integrated filter, heating and pump and an LED light strip that sits at the top of the curve. From a photosynthesis point of view, the light is quite limited. From an aesthetic angle, it can be set via remote control to rotate through cycles of colours, to flash, softly dim or just remain set at one of 15 colours of your choice. Atop it all sits a Perspex cover, which is a little awkward to remove and replace, and a removable solid wood panel, giving the tank an encapsulated appearance.

The present design is impaired slightly by the trail of cables hanging down behind the tank (I’m told that improvements and cable tidies are inbound).

MOA also includes an alternative reef backing in the package. This involves the same acrylic tubing and filter media, but the backing itself has no holes, instead using a few open strips to allow the passage of water. This results in a tighter, faster flow, and for movement-sensitive species, the pump size can be increased to allow for polyp activity.

For jellyfish or corals that need things brighter, there’s an option to upgrade to an A150W Kessil light, which will substantially boost available illumination, making zoas and photosynthetic polyps a realistic option.

In the role of jellyfish tank, this is definitely one of the best I’ve played with (and I’ve been hands on with a lot over the years). The 45 l/10 gal capacity is ample for smaller species, though brutes like Moon jellyfish will eventually outgrow it. The downside is price, at over £700 for the basic kit. However, those with money to spare could do a whole lot worse than one of these.