Filter media has never been so exciting! Dave Wolfenden enthuses over a new product with endless possibilities.

The Kaldnes 'K' series of media has been around for well over two decades, and it is widely used in aquaculture as the basis of the highly efficient biofilters required for heavily-stocked systems. Owners of EA’s Nexus range of pond filters will be familiar with K1 and larger K3 media, but its use in aquarium filtration has been pretty limited. With this new 'baby' version of K1, EA is hoping to change that, but it will also still be of interest to pond owners. In fact, the possibilities are almost endless.

What is K1 Micro?

K1 Micro is an even smaller version of standard K1, measuring approximately 6 x 6mm. The polyethylene media has a specific wheel-like shape, with a cross-shaped central portion.

By shrinking the size of the media, EA has managed to up the surface area per unit volume, allowing for more space for bacterial colonisation. However, surface area isn’t everything — it’s what you do with it that counts — and K1 Micro has a neat feature that allows more than just bacteria to colonise it.

How does it work?

There are two main ways to use it, and combining the two can make for efficient mechanical and biological filtration.

As a static media, K1 Micro does work biologically, but its primary use in this respect is to trap solids. The media’s structure collects suspended particles, and it can then be backwashed (most effectively with air) to clean this away. This is the basis of the Nexus Koi filter’s mechanical filtration, and with a little ingenuity, this could certainly be applied to an aquarium filter.

As a moving bed biofilm reactor (MBBR), the medium’s inner surface is where the magic happens. A biofilm builds up (and bear in mind this can take some time), but it’s constantly agitated courtesy of aeration, pumped flow or even just through sitting passively in a turbulent region of a sump or filter chamber. This sloughs off excessive biofilm, making the media effectively self-cleaning if utilised in this way. Nevertheless, the protected inner sites resist sloughing to a sufficient extent to allow various communities to survive unharmed. It’s a simple yet elegant idea.

EA suggests that once mature and coated in sufficient biofilm, this medium is capable of harbouring denitrifying bacteria that appear to favour very specific sites on its inner surfaces. It also makes the point that the open pore structure allows for rotifers, copepods and other natural plankton populations to lurk unmolested, each piece effectively becoming a miniature refugium in the protected surface area (PSA) — now that’s nifty.

The role of communities other than microbial ones appears to be important in maintaining water quality in both pond and tank — I’m not suggesting these cryptic microfauna can’t live in or on other media (they undoubtedly will), and EA certainly isn’t claiming that — it’s just that it appears to have engineered an environment just right for them to proliferate in quantity with K1 Micro. You don’t need to take EA’s word for it, as I’ve seen some amazing photos of mature K1 Micro as proof, with hordes of motile rotifers and sessile Vorticella protozoans clearly visible.

It has promising applications for filtration in reef tanks. Whereas the use of canisters and trickle filters is now recognised as contributing to nitrates, this media could really be viable as additional filtration for invert systems if it can harbour beneficial protozoans, rotifers and other microfauna as well as denitrifying microbes. I’ve just set up a small sump filter of moving K1 Micro that is starting to develop a biofilm. It will take several months to reach a fully mature state, but I’m intrigued by its long-term potential. 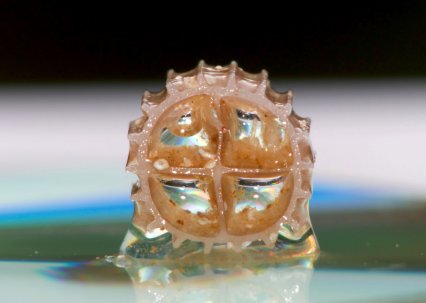 Like Kaldnes media, K1 Micro is white in colour. This may not sound like a big deal, but it allows for visual monitoring of the biofilm’s condition. If it’s nicely mature, the medium should take on a light brown colouration. A tip from EA is to avoid using more K1 Micro than necessary, to allow sufficient biofilm to develop on each piece for the required microbial and microfaunal communities to develop. Go overboard on the quantity and it will still perform nitrification, but it won’t reach its full potential.

You could use this medium in any number of ways, and the only limit is your imagination. Either replace or augment existing media in filters, or build your own. Experiment with various ways of moving the medium, and consider that different methods of movement (e.g. vigorous aeration versus a gentle tumbling motion) may favour different communities to develop. Try incorporating a range of movement techniques to maximise the medium’s potential.

I really think EA is onto something here. It’s certainly got me inspired — not bad for a tiny piece of white plastic!

Being buoyant and small, this medium gets everywhere if given the chance. If using it in a sump, some form of mesh or screening is essential to keep it where it’s needed. For some applications, this won’t be a problem — it can be placed in a bead filter for pond use, for example, where it will be contained.

Deceptively simple, this meticulously engineered filter medium has huge potential for tropical freshwater and marine aquariums as well as for ponds.