A few months back, I lamented the lack of variety in the tank and cabinet world. With hindsight, I was being a little hasty, and some absolute gems are appearing, says Nathan Hill.

The Emotions Nature Pro range from Portuguese manufacturers Ciano has filled a gap for a smart, affordable set-up. I’m deadly serious about the affordable part, too. I went out on a bit of a mission, looking at comparable product lines and the prices they were retailing at. I saw far inferior looking packages in some stores going for £100 more.

The cabinet is as smart as it gets. My test sample is clean white, neither reflective or tacky, and it goes together a lot more easily than the assortment of parts would suggest. We had ours built inside of half an hour, and once we’d put it into place and filled the tank, there was no wobble, no movement, no play. The only mistake I made — possibly something innate in my genes, as it’s the same mistake I’ve made with every cabinet I’ve built, ever — was putting the door hinges on back to front and needing to rectify them. The doors didn’t even take much adjusting in order to sit flush. I’ve lost the best part of half a day in the past on that job alone.

The tank comes with a fixed trim and tidy corners, and reeks of attention to detail during construction. Everything aligns nicely — these tanks aren’t rushed out. The dimensions are 102 x 40 x 61cm, making it stand tall, but without looking too thin. Some tanks have a gangly, ‘undernourished’ feel about them, but this isn’t one of them. The cabinet stands slightly taller, at 83cm. For those reaching for a calculator, I’ll beat you to it — there’s a volume of 197 l/43.8 gal in there.

The backing of the tank will make aquascapers squeal with delight. The rear pane comes frosted as standard, and you need no other backing on there. Any wall blemishes are gobbled up, and the lighting in the tank illuminates it nicely. Pro aquascapers pay a premium for frosted backs, and here’s Ciano giving it away as standard…

The lighting (included) is an LED strip of 30W, with fierce output. My PAR meter has gone awol, but anecdotally speaking, it looks punchy as anything, in a crisp, clean 9000 Kelvin looking temperature. It’s sharp white, not yellowed, violet or blue.

The filtration is snazzy looking, but a little breathless for my liking, which is a shame. Don’t get me wrong, it’s capable enough for everyday stocking, but as a fishkeeper who has been blessed with years of filters that belt out flows like tsunamis, the 550lph (claimed) from the Ciano CFBIO250 filter is rather limp. Physically the pump is a bit of a tiddler. 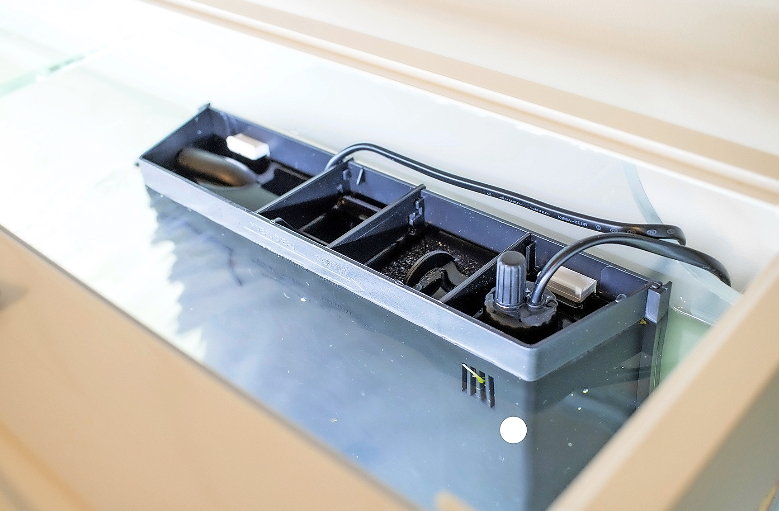 The filter can be accessed in situ.

The filtration comes in several stages. The unit itself is a big box, with limited places to be rigged up inside the tank — it hangs on pre-fixed hooks. There’s a dedicated space inside it for the included 200W heater, and then there are three stages of media. The first is a large (genuinely large) long foam mechanical filter. Then there is a curious slatted ‘rack’ into which you place filter ‘capsules’, two filled with biological media, two with chemical resins.

When you initially set everything up, you can also install an app onto your smartphone, which will notify you of which media need changing, and when. You can also get a ‘stop algae’ insert to replace the chemical resins if needed. Prices for inserts start at £5.29 for one medium Water Clear (chemical), through £5.69 for one medium Bio-Bact or Stop-Algae respectively, to £5.69 for the foam. The chemical inserts need replacing on a 30-day interval, the foams at 90-day intervals, while the biomedia is changed every 140 days — I guess we’ll cross that bridge when we get there, but I’m wary of changing biomedia willy-nilly, and I might ignore that replacement suggestion.

There are two things I don’t like about the tank, and both are relatively trivial. The first is the shortness of cables. The filter and heater come with some of the stingiest power cables I’ve met, and without an extension you’ll not reach your plugs.

The other is that the two holes at the rear of the tank (to allow the cables out) are set just a shade too low when the tank is filled. Pop a bag of fish in there, or even put your arm in for a routine algae wipe, and the water sloshes out, straight down the back of the tank, meaning that after every bit of maintenance so far, I’ve had to follow up with squeezing my arms into the crevice at the rear of the set-up, clutching kitchen towel and swearing my head off.

Verdict
Heaps of tank for your money, with one of the smartest designs going, and a frosted backing that is literally like icing. I’m actually upset that I put this tank in someone else’s house in order to review it. I want it back.
Ease of use: 4/5
Features: 5/5
Value for money: 5/5
Overall: 4.5/5
Price: £399.00
More info: http://ciano.pt/en/produto/emotions-pro-100