If proof was needed that the T5 market is holding its ground against the onslaught of the LED revolution, then it's right here, says Nathan Hill.

The trim but heavy Aqualumi is an aquarium lighting giant at a price that will turn a few heads — including mine.

As this is a T5 system PAR readings are a matter for the tubes used, as well as the unit itself. That said, the in-built German-engineered reflectors do wonders at punching whatever light is being produced back down where required — and importantly they are individual reflectors, like the much more premium-priced ATI lighting units we’ve also tested.

We will only recommend multiple T5 units with individual reflectors, as without them so much is wasted in restrike.

With the supplied mix of tubes we opted for — a combination of blues and 10K white tubes — we’re getting PAR of around 170 at some 45cm/18” (a good reading) making this particular combo suitable for a wide range of corals and high end reef tanks.

The reflectors are iQuatics’ own design, with replaceable reflective elements in the event of damage or degradation. Remember when installing the light to remove the blue film from the reflectors, otherwise you will have an unusually cold tinge to your illumination!

The chaps at iQuatics stress that the ballasts used, in compliance with IEC specification requirements, do not over-drive any attached tubes — which has been an issue with some imported units of other brands. Over-driving will increase intensity, but only at the cost of tube lifespan.

The ballasts are iQuatics’ own manufacture. They’ve had an overhaul and redesign, and can be purchased separately should one need replacing or if seeking to upgrade an existing light.

You get a huge space inside in which to lay out your six — yes six — tubes side by side and not only are the tubes inclusive but you get to choose which ones you want.

So, no matter how arcane your taste, how unusual your penchant for mixing up the spectrum, you can tweak to your heart’s content.

The light has two fans built in, one at each end. These pull air through the unit in linear fashion, sucking in one end and spitting out the other, and this might want to feature in any positioning considerations. It’s nice to see a couple of fans, but not the glut I’ve seen on some lighting.

Note that the optimal temperature for high-output fluorescent lights is a tight bracket around 35°C/95°F. Higher and cooler than this can affect the light spectrum and tube lifespan.

Speaking of positioning, you have two options: one is supplied as standard with the light, the second not so.

The first is a suspension kit requiring drilling into the ceiling and its associated joists, and having cables hanging down and attaching to the light.

The other involves fibreglass reinforced plastic sliding stands that rig directly to the glass of the tank and, depending on what braces you have on your aquarium, these may be easy or cumbersome to fit.

With the latter you are able to pivot up the Aqualumi for short periods, but the unit is not designed to stay upright for long. I’m concerned that aquarists may get used to propping up lights and walking away to do other things. I’d not risk that here, given the potentially tank-breaking weight of a falling luminaire. 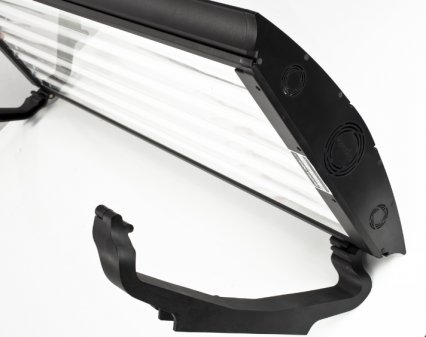 If opting for the brackets they’ll cost you an extra £14.99. On the plus side they are legal, requiring merely a screwdriver to fix them to the tank, unlike a huge number I come across that shouldn’t actually be on aquaria.

Aqualumis can be purchased in black or silver, being anodized or powder coated respectively. We actually dropped ours and scuffed it badly, so be careful when handling. However, prior to that I have to concede that the Aqualumi looks very good and I was surprised by the thought that has gone into the aesthetics.

On that note, will you soon become aware that these are heavy, thickset lights. Our 0.9m /3’ model tips the scales at more than 12kg/27lb and it wouldn’t be recommended to try to fit the canopy by yourself. It’s very much a two-person job, which is uncommon for aquarium lights.

I don’t the fact that I have to unscrew off both ends of the sliding cover before I can get to where the magic happens. I’d much rather see a simple sliding port that allows faster access to the tubes, although I’m being lazy.

In fairness, having to undo eight screws every seven or eight months to change some tubes isn’t going to kill me and if that’s the difference between corroded fittings or a unit that lasts for years then it’s a fair trade-off.

For the money, you get so much that it’s impossible to give the Aqualumi anything but a huge thumbs up.

I’ve already planned my next aquascape around this light as it has looks and robustness at an affordable price.

Ed’s note: Our test model only marginally underperformed an equivalent ATI Powermodule under our PAR meter, but the unit looks and feels as good if not better, has more fitting options, comes with tubes and for less than half the price!