Describing something as the 'Rolls-Royce' of its kind, tends to conjure up images of obsessive attention to detail, impeccable build quality, tons of features — and an eye-watering price tag! On that basis, Dave Wolfenden brings us the 'Rolls-Royce of aquarium pumps'…

According to Alexander Grah (co-founder of German company, Venotec), the objective when designing their Abyzz range was to produce the most efficient and sustainable pump possible, without worrying about the end cost as a constraint. Their approach was to redesign the aquarium pump from the ground up — and hang the expense.

Abyzz pumps are fast gaining popularity with reefkeepers, but they’re suitable for freshwater systems too, with the larger models even capable of running stuff like bead filters on Koi ponds. There are three pumps currently in the Abyzz 'A' Series range: the A100, A200 and A400 (named according to their maximum wattage).

I got my sticky mitts on an A200 to see what all the fuss is about. 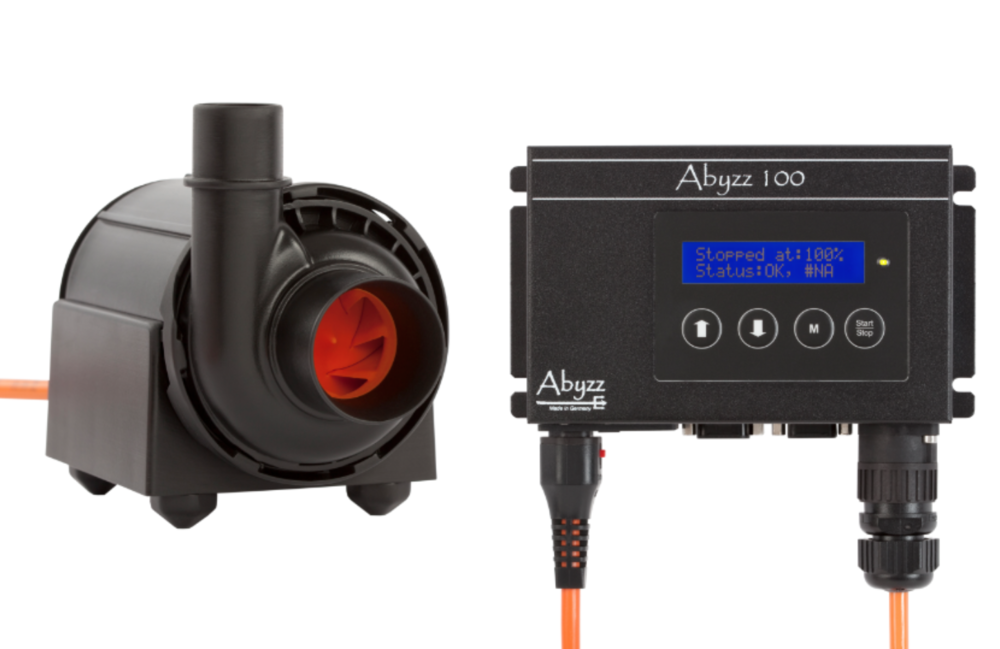 There are two parts to the package — the pump itself and the so-called 'Abyzz Super Silent Driver' (the pump won’t run as a stand-alone unit).

The pump feels solid, chunky and heavy, although it’s compact considering the output (the A200 is approximately 12 x 17.5 x 17cm high). The impeller housing has four substantial Allen bolts holding it onto the pump body (no fragile clips). The ABS impeller itself is an impressive orange affair — more akin in terms of design to the substantial impellers seen on pool pumps. The overall impression is one of a professional-standard piece of equipment. The inlet and outlet of the A200 will accept 50mm and 40mm fittings. As the pump body is made of ABS, you’ll need to use a 'transitional cement' if using PVC fittings to ensure proper bonding and fusion.

The Driver is basically a very sophisticated inverter, a gizmo that allows the pump to run at variable speed as a three-phase unit on 240V mains electricity. This is a masterstroke, as three-phase pumps are super-reliable, more energy-efficient and much more controllable compared to their single-phase counterparts.

This thing is just class — dig deep into the specs and you’ll understand why it’s pricey. The magnets alone are extremely strong, very expensive, and encased in titanium to provide unparalleled protection. The power cable (available in either 3m or 10m lengths) is sheathed in submarine-grade polyurethane (rather than mere PVC), and the impeller shaft is a specific titanium alloy to ensure a long life. Bearings are silicon carbide rather than ceramic, which reduces wear from sand or other debris that may work its way inside. So in terms of expense, it’s worth thinking about the materials themselves, as well as the labour involved — and just think of the R&D costs for these things alone!

The Driver has a simple control interface, with four buttons and a backlit screen. The pump connects in securely via a dedicated plug that’s bolted in place, and the Driver is then connected to the mains. There are 'master' and 'slave' D-sub ports for linking pumps to the Abyzz Control System (ACS) — available separately, and used to coordinate the activity of multiple pumps through one interface. A large heat sink forms the rear part of the housing (inverters tend to generate some warmth), and the Driver can be screwed to the wall — choose somewhere with adequate ventilation. Mount it somewhere it won’t get splashed or be subject to salt creep or humidity — it’s rated IP30 (obviously the pump itself can be used fully submerged or plumbed in on the dry side).

Plug the Driver in and switch on, and the unit beeps, the display letting you know the current status of the pump; a blinking LED lets you know the unit is running even when the display is off (a press of any button illuminates the display, which shuts off after a few minutes to save power).

An optional 'boost' setting can be dialled in to give an additional burst of flow at programmed intervals. The Driver’s display scrolls through various key snippets of information every few seconds the display is lit, including its temperature, the current mode, the pump’s current output, wattage consumed, and the length of time the unit has been running for.

Programming the Driver is reasonably straightforward — for example, to change the mode, press the 'M' button, scroll to 'Mode', then press 'Start/Stop' to begin editing. You can then adjust the settings accordingly, using ‘Start/Stop’ to confirm at each stage, and then store the programme. The Driver protects itself and the pump by preventing dry running and it won’t work if it’s overheated for whatever reason.

The A200 can chuck out water at the rate of 14,500 lph, and has a maximum head height of 9m. But the real beauty is its programmability. Tap into the potential of the Driver, and you’ll be creating wave and surge effects you wouldn’t have believed possible.

An advantage of running an uber-controllable three-phase pump through an inverter is being able to exactly match the flow to your requirements. Reducing the output of a regular pump typically involves closing valves to create an artificial head — the pump’s power use remains the same, so in effect this wastes energy. The Abyzz pumps, however, allow the pump’s power draw to be reduced by tweaking the speed of the motor, for a more energy-efficient approach. Abyzz calculates that reducing the pump’s flow rate to half the maximum capacity makes for an energy saving of over 75%.

Pump noise is literally non-existent (although there’s still noise from the movement of water); the instructions suggest that new pumps may be slightly noisy at first as the bearings bed in, but my test model had already seen some action, so was silent from the get-go. The pump isn’t self-priming, so it will need to be placed below the water level.

Pretty much the only maintenance is periodically cleaning the impeller (this involves unbolting the pump head — not difficult, but not a five second job). I was a little concerned at the lack of a strainer or guard on the inlet side, but this won’t worry most folks — in any case, Abyzz produces a stainless steel mesh guard for submersible use, or alternatively, a nifty inline strainer for dry side plumbing (both available separately).

'Permanent' mode sees the pump run continuously at a set speed (the speed being set on a percentage basis).

In 'wave' mode, the pump’s speed can be set at an upper and lower level, and the time interval between these programmed.

Additionally, there are two 'random' modes – in the first of these the upper and lower speed levels are set, and the output randomly changes between these within a programmed time interval; in the second of these modes, the time interval itself is randomised. 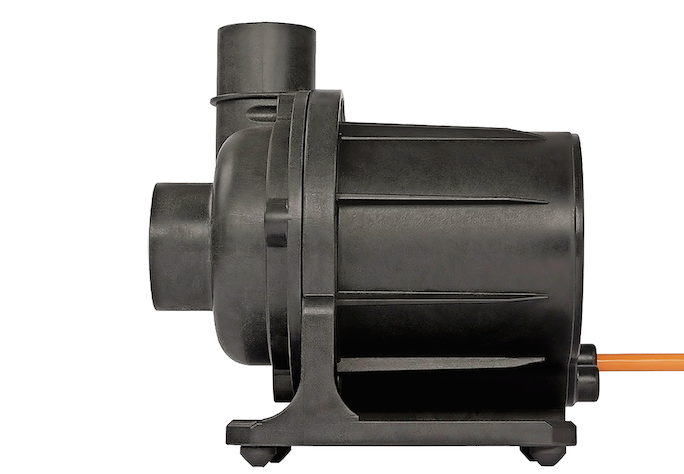 In terms of running costs, there are some significant savings to be made over other pumps — but you’ll need to take the long view when calculating at which point you’ll break even, on account of the high costs of the Abyzz pumps themselves.

I made some calculations, and the break-even point when replacing other pumps varies, but in most cases, an Abyzz will effectively pay for itself after a few years. For example, a 700W pool pump running a Koi pond filter costs nearly a grand a year to run.  Replacing this with an A400 means a saving of almost £400 a year in running costs — taking the initial purchase of each pump into account, the Abyzz’s break-even point is just under five years. After that you’re effectively saving yourself cash.

And that’s based on current electricity prices, which are likely to go up, and assuming the Abyzz is being used on maximum draw 24/7. Running it in reduced speed/energy modes will make potential savings even greater.

The Driver software can be subject to periodic optional upgrades — in such cases Venotec will pimp your Driver for a small nominal fee if you wish.

A final point worth mentioning is Venotec’s 'lifetime' (10-year) warranty — you’ll need to activate this shortly after purchase to extend the standard one-year warranty, but it’s free. Abyzz is confident the pumps will last well over a decade, suggesting that in most cases impellers might simply need replacing to make them as good as new after this period. Alternatively, the company will repair and refurbish pumps (for a charge) past the extended warranty.

You have to take your hat off to Venotec for producing such beautifully-made and uncompromising pumps. Sure, you’ll pay top dollar, but many fishkeepers will see them as a worthwhile long-term investment, with the potential to save energy costs and reduce their carbon footprint. In this respect, I’d suggest that the 'value for money' rating below should be viewed on a subjective basis according to your own wallet. There are other very good pumps out there that are more affordable, but in view of their superb build quality, unequalled efficiency and the aftercare offered by Venotec, the Abyzz might seriously be the only pump you’ll ever need to buy. Heck, I think this thing might even outlive me…