Welcome to controversy! The idea of interacting with fish will be anathema to some - yet hailed as revolutionary by others, says Nathan Hill.

This kit, comprising hoops, balls, limbo poles and goal posts, is designed to provide enrichment to the lives of goldfish, or other intelligent fish such as Oscars.

My first impression was that this set would be inhumane, cruel, and a tragic gimmick that I’d hate. However, after watching the accompanying DVD and seeing first hand how it works, I admit I’m somewhat disarmed.

The kit works on positive reinforcement, a lot like Pavlov’s famous salivating dogs.

The fish learns to associate the reward of a feeding wand with tasks of increasing complexity. Eventually it comes to perform all manner of feats when so prompted by a food stimulus.

Is this cruel? I’d argue not. Unnecessary, maybe, but not cruel. The fish in the video seems to relish the presence of the feeding wand and for those cynics who want to claim that you can only starve fish into performing, this was a plump specimen and a hell of a lot healthier than most privately owned goldies I’ve seen. So there!

Some might argue that the whole process of 'training' a fish is unnatural. I’d be inclined to ask what was natural about a fish domesticated over the centuries and now resembling little of its wild cousin. 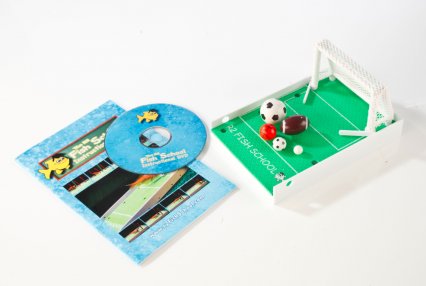 Novel objects
I think the only real potential for stressing the fish would be the initial introduction of novel objects into its environment. Some fish are much less neophobic than others and in a particularly twitchy individual the whole exercise might be in vain.

You get full instructions of how to use each accessory in the kit box. There’s a mini football pitch, various hoops and posts, and the all-important feeding wand that coerces the fish in the first place.

The video is pretty unbearable, but only because the US style of humour didn’t do anything for me. In fact, it made me want to jump on a plane, hike my way across the entire breadth of America and slap everyone involved in it — but that’s quite irrelevant.

This kit isn’t for everyone and I couldn’t use it on my own fish, but I think there’s mileage in this. I’m not sure it’ll be warmly received by all, but this is harmless, interactive fun for fishkeepers.

If nothing else, the feeding wand could prove handy for performing fish health checks... 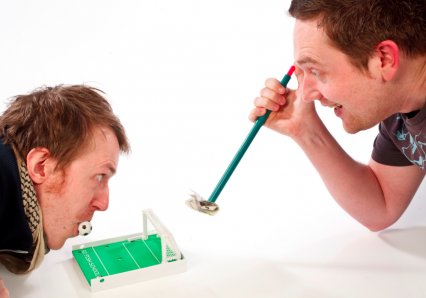 Above: Nathan tries out some of the tricks for himself, showing that even the simplest of creatures learn to respond to the right stimulus in the feeding wand!