On test: Evolution Aqua AS600 tank and cabinet Nathan Hill finally gets to play with one of the new Aquascaper aquariums from Evolution Aqua. So was it worth the wait?

I'd been awaiting the arrival of an EA tank for way too long. From the early days, when the dimensions were mentioned to me in confidence, I was dancing on the spot like a dog who knows there’s a sausage inbound.

The Aquascaper range has been designed, exactly as the name alludes to, for aquascaping, with emphasis on a substantial footprint.

I want to very quickly shut down any anti-aquascaping prejudice you might have at this point. ’Scaping is a polarising subject, with its share of lovers and haters. I’d never really grasped just how passionate some fishkeepers are in their dislike of aquascapes, for reasons I only vaguely comprehend. If you’re in that camp, just note that these tanks also make the best biotope footprints I’ve worked with outside of public aquaria.

Back on track. Out of the six tank sizes, I have the 600 model to play with, which has 600 x 500 x 360mm dimensions. You read that right, it really is 60cm long and 50cm wide. The thing is, those dimensions aren’t as imposing as they look on paper, and as a cornerpiece in a room it works exceptionally. I’m biased, as the low, flat and wide model of tank is something I flirted with for decades (years of maintaining touchpools in public aquaria planted a few seeds) but EA has nailed it with this size.

The glass is 8mm thick (other models with different dimensions vary between 5mm for the AS300 up to 19mm for the AS1800). It’s branded as ‘Super White’ which is a low iron, high transparency glass, perfect for photography. There’s no ‘green’ about it, and at best a subtle hint of blue when you look end-on through panes.

Everything is held in place with some tightly beaded, clear silicone — it’s not quite up there with ‘that’ Japanese aquascape brand for silicone precision, but you have to get mighty close to notice. There are no braces, no lips, and no trim, either. As tanks go, the emphasis is on minimalism, so that you’re less distracted by the tank itself, and free to focus on what you put in it.

On the flipside, if you want a hood on it, then there’s nothing that comes as standard. Personally, I think a hood would destroy the aesthetic of the tank entirely, but I know plenty of folks who still like them. The- open top means you’ll need to consider your livestock carefully, as any jumping fish are going to launch themselves.

I’d say that lighting the tank could be a problem, but it isn’t. In the time I’ve had mine, I’ve assembled goosenecks twisted around it, and LEDs on sliding rails directly on top. Illumination is no obstacle.

Underneath, there’s a discrete black base mat, fixed in place. I’ve seen it becoming fashionable for some ’scapers to ‘take the risk’ and put their tanks flat on to cabinets without any kind of dampening, but

EA isn’t letting you take that risk. That’s pretty sensible, in my opinion. 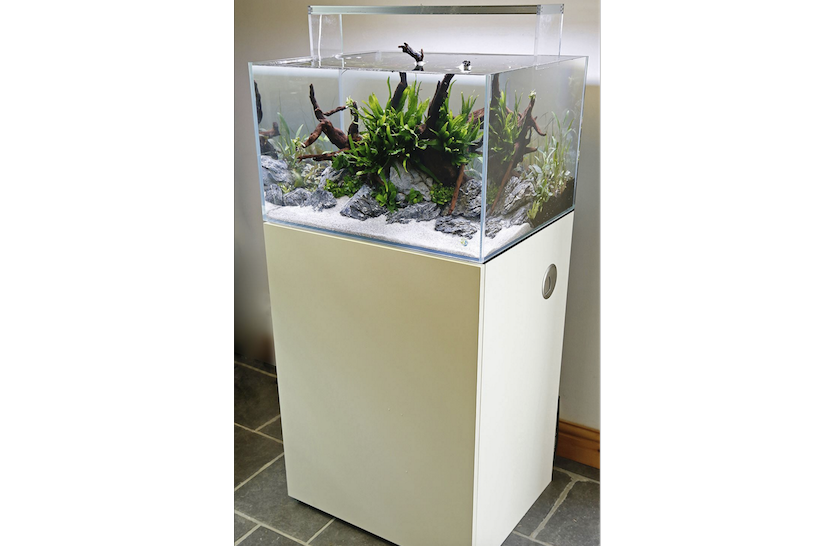 The cabinet is as sturdy as they come, as is EA’s style. It comes pre-built, so there’s no fiddly flat-packed assembly — something I know can be a deal breaker for some aquarists. You’ve 16 colours to choose from, ranging from natural woods like Royal Oak and Japanese Pear, through basics like Ultra-Gloss Black and Super-Matt Grey, to the likes of Raw Concrete Grey. It’s quite the palette.

The cabinet on the AS600 comes with removable cut-outs in each side, to allow for power cables, pipework and CO2 to run up the sides as opposed to the rear of the tank — freeing up creative options for the rear view.

From my perspective as a man just over six feet tall, the tank on the cabinet is a delight to work with. I’ve dealt with tanks set so low in the past that ten minutes of bending over to plant them leads to searing lower back pains. The wide open top combined with a lack of obstructions means you’ve a lot of elbow space.

I’ve not tried a true, planted ’scape in mine yet (that’s the next job) but I have used it for a hardscape layout as a biotope (which you’ll be able to see next month) and it was bliss to decorate. The extra depth front to back means that pieces of wood usually restricted to two-dimensional positioning can run a full 360° orientation. Furthermore, the extended width of the tank means it can be viewed ‘side on’ as a layout in its own right. That makes for some fun at the planning stage, and in my case of laying out for biotopes, it means that I could factor in caves that are easy to peer into from certain perspectives — before, I was lucky if the resting place of the decoration afforded me a glimpse into hidey holes.

From a dedicated aquascaping perspective, the mileage is unreal. Whether you like Iwagumis, Dutch tanks, decor breaking the surface and planting orchids — whatever —you can do it with impunity here. That extra 20cm or so of standard width makes miles of real-world difference.

Volume when filled to the brim is 108 l, and the temptation is to fill it to that brim. I did for a while, and it looked amazing.

The dimensions are really redesigning layout potential, while the open top makes it stand out from most of the competition. I used it for a biotope, and it came out great. I’ve seen it used for a ’scape and it looked great. It almost makes me want to try a traditional community, because I know it’s going to look great set up as that, too. Keep an eye out for next month’s step-by-step guide where I’ll show you what I did with mine.