The Nano cube 20l from Dennerle measures 25 x 25 x 30cm/10 x 10 x 12” and there are also two other versions — a 10l and a 30l. The range as a whole caters for the shrimp fan who likes a tank with style. Panoramic front corners allow for seamless viewing at almost all angles and an open top helps create a very modern finish.

The German company’s background in planted aquaria is evident in their advertising material and products supplied for this tank. They include nutritious substrate, plant food and a powerful power compact T5 light which, when combined, returned great results.

The filter provides a particularly nice touch. It’s similar to your average small internal filter but, instead of being produced to the usual rectangular spec, is triangular when viewed from above. As a result it becomes much less intrusive as it sits neatly in the rear corner of the tank.

More forward thinking is evident in the fine mesh that covers the filter inlets to prevent shrimp and shrimplets being sucked up.

The 150 lph filter had run for well over a month, with only a small amount of clogging before cleaning was required.

The very fine grain gravel supplied is again chosen with small shrimp in mind, allowing them to sift through it with ease. 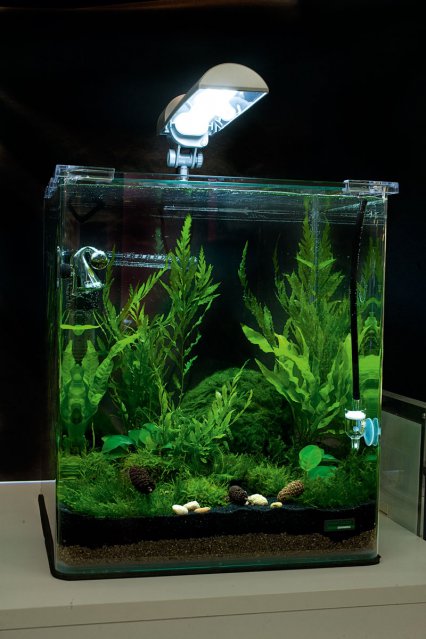 Shrimp food and shrimp conditioner are not quite as readily available compared to fish food, so this is a welcome addition to the all-in-one set-up.

A cover glass is supplied as shrimp have been known to climb out in a bid to freedom.

However I have an issue with the light unit. While stylish and very efficient, that efficiency only lasted a very short time. I had two lights and the first stopped working shortly after a month — and the replacement shortly after a week!

PFK spoke to Dennerle about the issue and they reported that they had not had any other issues with their lighting.

Another issue, although not as serious, is the use of two-pin European plugs. The transformer for the light unit is large and heavy enough to support a small building and the addition of a 240v adapter, in my experience, makes for a poor connection and intermittent power to the light. Perhaps that was a reason for the poor lifespan of the light unit?

After the first light gave up I changed the adapter as well as the light unit.

The filter’s plug is a little more forgiving and a simple adapter should see you right. Nonetheless, having to add voltage converters to our already massive array of electrical connections is an inconvenience to say the least.

Again PFK checked with Dennerle and they said that it was an issue that they were working on. Make sure yours has UK plug adapters supplied free when you buy it.

I love these tanks. A lot of thought has gone into their production and into making a great home for your shrimp. The supplied tips and advice about keeping shrimp are more than enough to get a beginner started, and there’s even advice about kick-starting your filter without off-the-shelf chemicals.

They look smart and you have all the things needed to create a really successful little tank. Besides my lighting issues, I can find little fault with this model.