Aquarium Systems have joined the high-flow-low-energy circulation pump market which has been so far dominated by Tunze, Hydor and company.

But they are no strangers to making good pumps - indeed far from it - as the powerhead market, led by the highly successful Maxi Jet range, used to be regarded more or less as their own domain.

Maxi Jets are still very much in evidence today and used by diehard freshwater and marine keepers, giving, as ever, great satisfaction.

They have proved incredibly reliable over some considerable time, but were getting overtaken by the outputs and widths of flow being delivered by a new breed of circulation pumps.

My first impression is that I like them a lot. They are compact, appear well made and, as soon as you open the box, you are comforted by the same high levels of customer satisfaction as always offered by the Maxi Jets.

The plastic components feel tough and durable and have very easy impeller access. The pump fits inside the tank by way of a sat-nav type of fitting, which is quite novel and sticks really securely to the glass. The pump has limited directional movement by way of a ball joint, though, and I would prefer a bit more. 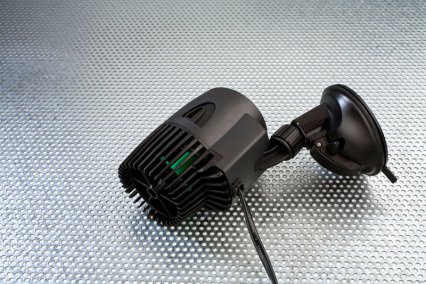 We picked out the NWA 5500 model, which delivers 5,500 lph for just 6.3w. That divides down to 873 litres per hour per watt of energy consumed and represents one of the most efficient pumps PFK has yet reviewed.

These pumps definitely deserve a place on retailers’ shelves and in hobbyists’ tanks, and I rate them a direct competitor to Hydor’s Koralia range. There isn’t a programmable, flow controllable model available as yet, though it can be wave controlled with a plug-in attachment.

Any downsides? As firm as the suction pad is I really like magnet fittings as they allow for easy repositioning and you don’t even need an area of clean glass to which to attach the pump.

As mentioned earlier, the bracket makes the pump stick out in the tank and limit directional control.

Bear in mind too that we are spoiled by the unidirectional capabilities of the Tunze Nano Stream and the tiny in-tank profile of the new VorTech MP10.

A minor niggle, the green impeller on the NWA 5500 glows bright green under actinic light which I found to be quite noticeable, especially if the pump is positioned in one of the front corners. Yet, as I say, that’s only a minor gripe.

Despite its low power consumption, these are powerful pumps capable of moving a lot of water. I tested the NWA 5500 in a 240 l/53 gal, 120cm/47” reef tank and it created strong water movement across the whole length of the tank. Some competitors are so broad they don’t cover any distance.

I was both surprised and pleased by the gutsy flow of the pumps, again reminding of me of why we all bought so many MaxiJets.

This new range of well-made products is well worthy of a place in the busy marine market. Forget retro-fit Maxi Jet upgrades like the Sure Flow. You no longer need them and I found mine noisy. Go and get a NeWave instead!

Its launch as a compact but powerful circulation pump suitable for nano tanks upwards may be slightly overshadowed by the new VorTech release, but don’t forget that this is a quality pump for a fraction of the price of the top-end examples.

An affordable price and low running costs are a big draw for this range as, lets face it, few of us have much disposable income at the moment.

The powerful flow delivered by our test model may mean that you don’t need as many of these or as large a model as you would have thought either.

The proof is in the long term usage, so go out and take a look at one, preferably running in a reef tank.

If this range proves to be as reliable as others made by Aquarium Systems,  a high level of customer satisfaction should be almost guaranteed.