When moving house where's the best place to put your own tank? At work of course! Dylan Mason's reef display is the talk of his shop. Jeremy Gay reports.

We’ve met some great shop staff on the PFK shoptours and Dylan Mason is just one of them. I first met him at Maidenhead Aquatics in Truro, Cornwall, a few years ago.

I liked the store and, seeing some excellent in-store display tanks, it was clear that the staff were really passionate about their marines.

Dylan told me of his own, pretty successful reef tank at home and when I revisited the store recently he’d got himself a new tank and, conveniently, had moved it into the shop because he was moving house. 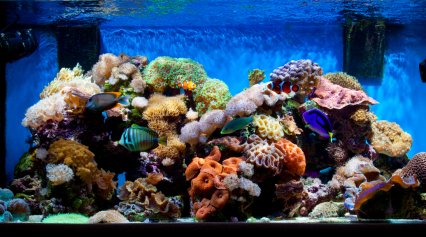 Working with current tank dimensions, Dylan admits to being ‘iffy’ about the three tangs in it because of lack of swimming room. To combat this, however, and, for a more natural look, he moves all the rockwork forward to effectively double the room by offering space front and back.

The rocks are just balanced, not puttied, as he will have to move the tank back home again one day.

He built this current tank to his own specifications. It’s sumped and with discreet surface weirs instead of the more usual corner, box-shaped weir. This also frees up space and, after running quite high end SPS-dominated tanks in the past, the whole design was aimed at being simple and time maintenance efficient. 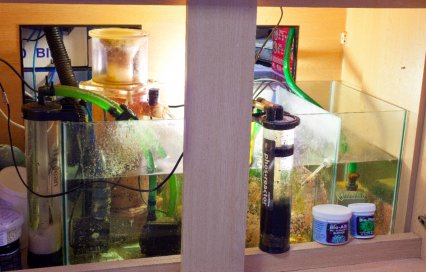 In the sump is a Schuran protein skimmer, a biopellet reactor, phosphate reactor and an algal refugium. Water parameters include calcium at 400-440, magnesium at 1,500 and KH at 9.6-10.4; nice, high levels for growing corals. In-tank water flow is provided by Hydor Koralias pumping a powerful 40 times tank volume turn over per hour.

In previous tanks Dylan has had calcium reactors, deep sand beds and pellets, but warns that the pellets can make you lazy. "You can’t beat a 25% water change," he says, and will do one even when not necessary. He uses water changes and occasional supplements to provide all the minerals the corals need.

"So what are the advantages or disadvantages of running your own tank at work?" I asked.

The disadvantage, says Dylan, is that it is hard to enjoy. Kids bang on the tank and he is so busy running other tanks in the shop that he hasn’t even had time to sit, watch and work out which one of his three tangs is the boss, for example. At home you’d do so quite quickly.

However, there’s the obvious advantage of having everything to hand if something goes wrong — and a team of experts to look after things on your day off! 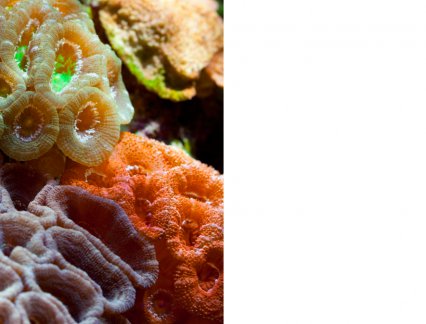 Dylan has picked so much up very quickly. His marine learning curve was quite a challenge, but he was really up for it and did loads of reading.

Dylan went straight for hard corals as, although they are more demanding than soft, he loves the exotic shapes of the branching and plate corals and movement of the LPS.

His current tank contains LPS, SPS and soft corals and says he uses the plainer softies to show off and highlight the brighter colours of the hard corals next to them. When Dylan chooses a new coral he always looks at colour contrast — and if he likes it, it’s going in!

Like all reefkeepers, he dreams of owning bigger and better tanks filled with colourful Acanthastrea, Scolymia and Acropora. He wants a 0.9 x 0.9 x 0.5m/3 x 3 x1.5’ deep lagoon tank lit by a 400w halide.

Seeing as his old and his current tanks are lit by metal halides Dylan is clearly a fan.

At the time he admitted he was not totally convinced by LEDs, but this was last year so I wouldn’t be surprised if, with all the current launches, he hasn’t tried something by now.

Dylan’s advice for first-time reefkeepers? Invest in good kit and don’t attempt any short cuts, as with live rock which, he warns, may harbour lots of Aiptasia if bought too cheaply.

He also suggests reading up, doing plenty of research and finding and dealing with a shop of good reputation. Another suggestion is listening to lots of advice, although Dylan found that not all of that has been useful!

Dylan’s tank favourite is his clam which he has grown on from 8cm/3”. He says a lot of its growth is down to regular addition of amino acids. 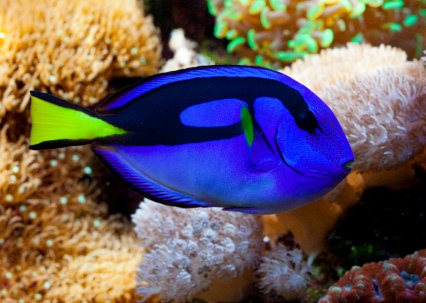 His favourite fish? Dylan obviously loves tangs, with a Regal, Sailfin and a Bristletooth in that four footer, though his all-time favourite is the Achilles tang. The store manager has such a fish in a display right next to his!

The tank seemed successful and problem free, yet I considered that Dylan’s six years of reefkeeping experience couldn’t have been totally hassle free.

He explained about problems with Zoo spiders (parasites of Zooanthus), corals dying, an expensive wrasse jumping out, algae and cyanobacterial blooms. With the spiders he had to freshwater dip his corals every day, but now employs a wrasse to help — and he has always has help from reefkeeping friends.

Check out the video of Dylan's tank below: