The longest living snake in captivity has passed away at her home at Columbus Zoo and Aquarium.

Fluffy, an 18-year-old Reticulated python, was 24ft long and weighed 300lbs. She was awarded the title of longest snake by Guinness World Records.

Fluffy was gigantic but gentle. She came to the Columbus Zoo in March 2007 and drew large crowds when she made her public debut the following month. Originally brought to the Zoo on loan, she was a visitor and staff favorite and the newly opened habitat at the Columbus Zoo became her permanent home.

"When Zoo visitors saw Fluffy they experienced many emotions such as awe, curiosity and even fear," stated Zoo President and CEO Dale Schmidt. "Everyone was moved by her presence and she created the connection for them to learn more, and care more, about misunderstood animals such as snakes." 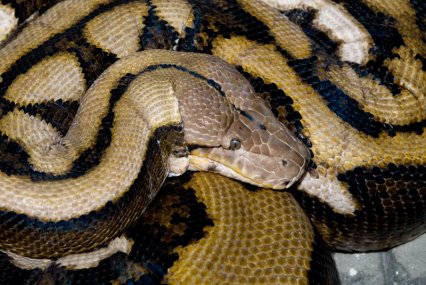 Fluffy died due to an apparent tumour. Preliminary findings of a necropsy (animal autopsy) performed by The Ohio State University College of Veterinary Medicine revealed the presence of a mass on her ovary.

Reticulated pythons are non-venomous constrictors found in tropical forests in Southeast Asia. They are the world’s longest snakes averaging 10-20 ft in length. The skin has a geometric pattern that camouflages the snake, protecting it from predators and allowing it to ambush prey.

Reticulated pythons are widespread but they are killed for their skin and numbers are dwindling.

According to Guinness World Records, the longest snake ever was a Reticulated python measured in Celebes, Indonesia in 1912, which was 10m (32ft 9.5in) long.