After four months and a combined distance of 10,717km travelled, the results are finally in! The 'Big Jumeirah Sea turtle race', which started on June 29 when six rehabilitated turtles were released into the Arabian Gulf in front of a thousand supporters, is finally over.

The clear winner was 'Storm‚' of Burj Al Arab, a 100kg Loggerhead sea turtle, who beat off stiff competition from her competitors by covering 4,083km since her release four months ago.

The six race participants were a mix of Green and Loggerhead sea turtles, as well as two critically endangered Hawksbill sea turtles. The turtles had all been brought to the Dubai Turtle Rehabilitation Project (DTRP) by members of the public after being found either sick or hurt.

After being restored to health at the DTRP, the turtles were fitted with a satellite tag to track their movements and water temperature preferences, as well as to measure the success of their rehabilitation. The experiment marked the first time Loggerhead turtles were satellite-tagged and released into the Gulf. 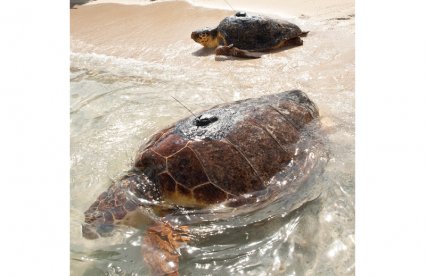 It was an emotional race for Warren Baverstock and David Robinson of Burj Al Arab Aquarium, who help run the DTRP and monitored the turtles during the race.

A low point of the race was when the sixth contender, 'Bahar' of Jumeirah Beach Hotel was injured at sea and could not complete the race.

Speaking about the results of the Big Jumeirah Sea Turtle Race, Aquarium Operations Manager Warren Baverstock said: "We have been overwhelmed by the positive response from the whole community, the feedback and great support. For the last four months the whole team has been monitoring the turtles on a daily basis and checking what they are up to. It has been a very special journey for everyone involved and we are very proud that every contender, Storm in particular, performed so well."

The Big Jumeirah Sea Turtle Race coincided with the DTRP's annual summer sea turtle release on June 29. On this day, more than 150 rehabilitated Hawksbill sea turtles were released by 150 children, including local schools pupils, hotel guests and competition winners, who along with members of the public and UAE residents, enjoyed first-hand the exhilaration of returning these endangered sea turtles to the wild.