Let's plunge back into the seas around the UK for this week's offering of wet, weird and wonderful fish species with the seldom seen, but actually quite common Cornish sucker, Lepadogaster purpurea.

Most of us with even a passing interest in things aquatic will have at some point dabbled in that favourite seaside holiday activity of rock-pooling, but although Lepadogaster purpurea is a relatively common species on the rocky western shores of the UK it is likely that few of us have seen one, instead filling our buckets with shannies, shore crabs and shrimps.

The Cornish sucker is a far more shy, secretive and stealthy species unlikely to be tempted into your net by a tasty morsel. Instead you have to work a bit harder to find this peculiar little fish.

They are typically found further down the beach near the low tide mark where they see out the water-less hours of low tide under a damp boulder, or clinging to a rocky overhang beneath seaweed. Here they can survive for several hours completely out of the water as long as they don't dry out.

They are an oddly shaped fish, rather tadpole-like at first glance with their large heads topping comparatively small bodies. The flattened head has a strange, almost duck-bill like mouth which is surprisingly large for such a small fish and is topped by an odd tentacle behind each nostril.

The fish clings to rocks with the aid of fused pelvic fins and surrounding tissue which form an incredibly strong suction cup meaning they are at home living in among the strong currents and crashing waves of the inter-tidal zone.

They are capable of shuffling along rocks and larger seaweeds such as kelp using this suction-cup fin as traction.

Their soft, slimy body is variable in colour, changing from darker to light tones depending on the substrate the fish finds itself on, but the patterns of spots and bars are typically reddish brown to purple and green over a lighter background. 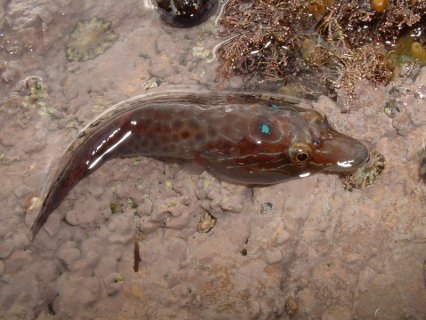 The back of their head is marked by two impressive neon blue ocelli (eye spots) which are thought to be there to confuse predators (see picture above, by the author). Growing to little more than 10cm/4" they are a largely solitary species, only coming together to breed when either parent can be found guarding golden yellow mats of eggs underneath rocks.

There has been some confusion regarding the Lepadogaster species of clingfish, particularly Lepadogaster purpurea and L. lepadogaster which were until recently believed to be regional variants of the same species. A study of the DNA and other aspects of both fish was carried out by a team from Portugal in 2002 and their conclusion was that they were different species whose ranges overlap and it is now believed that all UK specimens are likely to be L. purpurea which has the more northerly range.

Check out the video below. It's actually a link is from a former PFK forum admin's YouTube channel which is called Fish, tanks and ponds, and it's of a fish I caught for him to film a while back when we were rockpooling – the scientific name is wrong, but this is because we hadn't read the Portuguese paper at the time!