Weird fish of the week: Coelacanth Nathan Hill looks at the Coelacanth â€“ a non-extinct dinosaur that has lobes for fins and produces live young â€“ in the continuing weird fish series.

Many of us will already be familiar with this unusual fish, given its popularity in natural history documentaries. It is by no means the breakthrough discovery of the last decade or two that some believe it to be, although this has been the time when the majority of live specimens have been witnessed.

The fish was thought to have gone extinct about 65 million years ago, having first appeared at around an estimated 410 million years ago. Most of what was known about the group – all 80 or so species – had been methodically gathered from fossil evidence; a jaw here, a fin there.

The fish spectacularly reappeared when it was hauled upon the boat of Captain Hendrick Goosen on December 22nd, 1938. Museum official Marjorie Courtenay-Latimer was called in by local fisherman who were on standby to contact her in the event of discovering oddities, and she in turn had the fish preserved to the best of her abilities at the time and called in James Smith. Smith subsequently identified and named the discovery Latimeria chalumnae – a hybrid of a name, part in honour of a friend, and part in recognition of the region of the find.

There are now known to be two living Coelacanth species on this planet. L. chalumnae, and the more recently discovered L. menadoensis, which was found in an Indonesian marketplace. Formerly, Coelacanth had only been discovered along Western and Southern Africa, Madagascar, and the Comoro Islands, where L. chalumnae reside.

Coelacanths are hard to find in part because of their penchant for deeper waters. They normally live between 100 and 500m down, only venturing to shallower waters at night where they feed upon dozing fish.

The other reason they are tricky to find is that they like to reside in deep caves underwater, often sharing in surprisingly dense populations to one cave. They are a nervous fish, and many suspect that they are prey to sharks. Certainly, many sharks like to inhabit the same regions that Coelacanth do, and bodies have been discovered with bites taken out of them.

Coelacanth are big fish, often attaining over 1.5m. They have thick, toughened scales to protect them, and they are sluggish in a way that many fish that inhabit such cold, deep waters are. 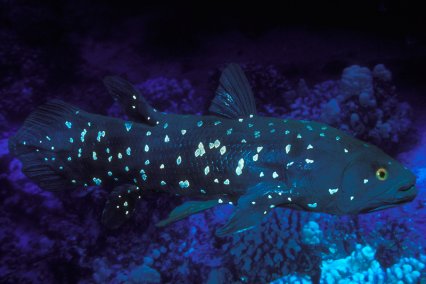 Even so, they can be surprisingly mobile when they need to, and they certainly have the fins of a good swimmer. Many of their fins are paired, and they have twin pelvic and dorsal fins, as well as the two pectorals so familiar to modern fishes. Anyone who has seen footage of these fish moving can testify to their unusual and almost hypnotic rhythmic movements. Ingeniously, they will often use water flows and currents to move themselves around, literally hitching a ride on drifting water.

Often, the phrase ‘lobe finned’ is used to describe Coelacanth, without really explaining what this means. As well as having differences in the braincase and an ability to move their heads that most other fish lack, the phrase refers to the bone structure of the connection between fin and body. Where a modern, ray finned fish has several bones that connect to pelvic and pectoral regions, the coelacanth only has the one. Generally, their bones and muscles tend to be more developed in these regions, too.

These are ovoviviparous fish, meaning that they produce live offspring by having eggs that hatch and develop internally. A female may yield up to 26 of these pups at one time, but after that our knowledge of their reproduction is virtually nil. We know nothing of courtship, breeding, or even where the juveniles go to grow on.

This is a protected fish, although not a huge amount is known of actual wild populations. Many attempts at conservation have been started, some with greater success than others, and it certainly won’t be a specimen to turn up on the home aquarist’s radar any time soon. There is something to be said, however, in a fish that goes undetected for 65 million years, and then runs in to humans and trouble at the same time…

The video shows a Coelacanth caught in Sulawesi a few years back. Unfortunately the fish was doomed from the moment it reached the surface of the water. Given the temperature difference – some 20°F – between the water here and the water at the Coelacanth’s comfortable depths, it is generally accepted that even if the fish had been released from here it would have lacked the strength to fight its way back down to an acceptable level, through changes in its metabolism and oxygen requirements.