This week's choice for water-dwelling weirdo status is the Blob sculpin, a visually unfortunate deep sea denizen whose depressed looking face will be familiar to many of us from photos that don't necessarily give the most truthful portrait of the species.

Almost every photograph you'll see of the Blob sculpin (Psychrolutes phrictus) shows a pink, amorphous 'face' staring lugubriously at the camera with its down-turned mouth and drooping 'nose' giving an impression of permanent despondency, just like the one above.

This is hardly surprising given the circumstances behind these portraits.

The Blob sculpin typically lives deep in the waters of the North Pacific, and when I say deep I mean at the kind of depths that would crush you and I flat. There's a more than a few litres of water pushing down on you when your chosen home can be almost 3000m down in the midnight dark of the bathypelagic zone, so it's no surprise that Blob sculpins look no more at their best on the deck of a trawler than you or I would resting somewhere on the sea bed off the continental shelf.

All this being said, they're still not the most aesthetically pleasing fish when alive but when you live in permanent darkness who cares what you look like? 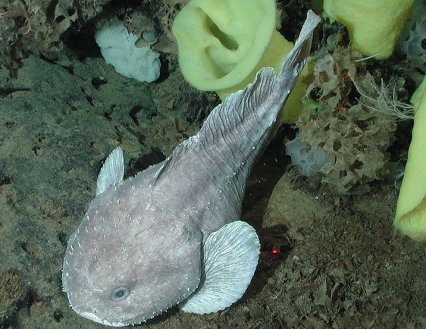 When living they are an overall greyish colour and their huge head and much of their body is covered in tiny spine-like cirri, giving them a prickly appearance. Blob sculpin bodies are small and tadpole-like in comparison to their massive, rubbery lipped head which is fringed by large pectoral fins.

Their flabby, deflated countenance when dredged up from the ocean's depths is down to extremely low muscle tone which is typical to many deep sea species. They are largely sedentary, content to spend much of their time waiting for food to come to them, or sedately swimming in search of typical foods such as crabs, molluscs and sea-pens. Check out the video below:

Little is known about their lives, but R.O.V.s and other submersibles have observed males apparently guarding large batches of eggs on specially prepared patches of sea floor where they  have cleared away sand and sediment that might otherwise smother the eggs.

The name Psychrolutes is derived from the Greek term for 'to have a cold bath', probably alluding to their chilly deep sea homes. There are 10 other known Psychrolutes species as well as a further 30 in the Psychrolutidae family, which is more commonly known as the 'Fatheads' to add a further unflattering layer to the Blob sculpin name. It's no wonder they look so grumpy with all this name calling!

Psychrolutes phrictus is the largest known member of the family, growing to around 70cm/27" and weighing about 9.5kg/21lbs.

None of the blobfish are targeted by commercial fishing, but unfortunately they often end up being dragged up as by-catch from deep sea crustacean fisheries as they are unable to avoid the trawls due to their sluggish nature. One species, the Oceanic blobfish (Psychrolutes marcidus) is believed to be heading towards extinction as a result.