A female Zebra shark (Stegostoma fasciatum) has spawned at a hotel aquarium in Dubai â€“ without the help of a male. This is the first time a virgin birth has been recorded in this species.

The shark, called Zebe, has been at the Burj Al Arab aquarium since she was a pup in 2001.

For four years in a row she has been laying eggs that have gone on to successfully hatch, with eight of her pups born since 2007 still being alive. 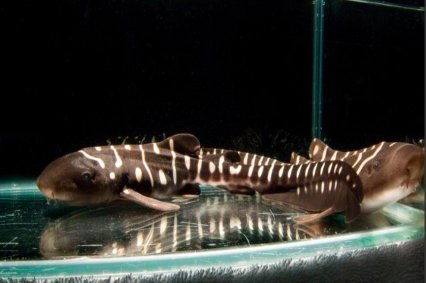 DNA analysis of some of the offspring at the Central Veterinary Research Laboratory in Dubai has now confirmed that the pups have been born through a process called parthenogenesis, also known as a virgin birth, where the female reproduces without the presence of a male.

The evolutionary phenomenon has never before been recorded in this species of shark. The test results were published in November's Journal of Fish Biology and the same day, the first pup of this year's batch of eggs hatched out

"It was already known that a shark had done this before, but they were of a totally different lineage than Zebra sharks; so, this is very exciting," said David Robinson, one of the marine biologists who has studied Zebe and her pups.

Whether Zebe's offspring will be able to produce pups of their own is yet to be seen.