Rocker Tommy Lee wants to make a 'sex tape' to expose what he claims to be 'sick and twisted' whale breeding practices at the aquatic theme park SeaWorld.

This follows a denial from SeaWorld, in response to an earlier letter sent by Lee, that trainers' lives are put at risk during the collection of semen.

The Motley Crue drummer claims that the park's main attraction, Tilikum the whale, which has been involved in the deaths of three people, is being kept in captivity purely because he is the 'chief sperm bank'. Lee is demanding that the whale be released. 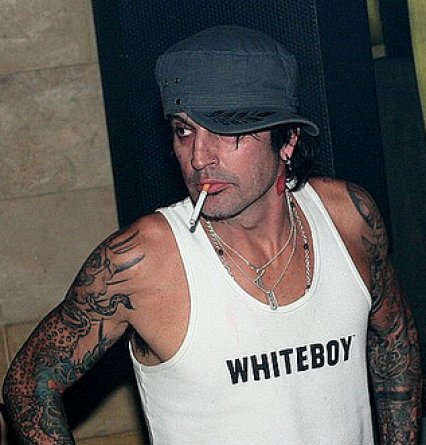 Lee (pictured above) first waged war on SeaWorld last week, when he wrote to the President of the Orlando, Florida complex, in protest over the Orca breeding programme. He wrote: "After learning about the bizarre way you breed killer whales, my friends at PETA and I are stumped about SeaWorld’s announcement that no people will ever again have direct contact with Tilikum, the Orca who has killed three people including his trainer this year.

SeaWorld responded by saying that Lee's claims are 'beyond ludicrous' and that PETA executives' research is flawed. A spokesman told TMZ.com: "The process of collecting semen for (artificial insemination) doesn't differ in any meaningful way from the techniques employed in managing livestock or other species for zoological display.

"Contrary to the charges made by PETA and repeated in Lee's letter, our trainers do not now nor have they ever entered the water with Tilikum for this purpose. The safety of SeaWorld staff and the welfare of our animals are our highest priorities.

Now Lee is challenging SeaWorld again, saying: "To settle this, how about PETA and I come to SeaWorld and videotape the process, and then people can decide how natural it is? It might make your dramatic news releases about a new Orca pregnancy or birth less appealing, but the public deserves to know. And they've undoubtedly never seen a sex tape like this."

Tilikum measures around 6.9m/22.5ft) in length and weighs 5,600kg/12,300lbs. He was captured in 1983 and is the largest killer whale in captivity. He has sired 16 offspring, 10 of which are still living. In February this year he dragged a trainer underwater to her death, watched by horrified spectators - the third human death in which the whale has been involved.