A new study has given credence to a suggestion that ancient sharks bred in the shallows of freshwater lakes and formed nurseries for their hatchlings.

The study by a team of German palaeontologists found 230 million year old fossil egg capsules and tiny shark teeth in an area of south western Kyrgyzstan known for its preservation of insects and plants from the late Triassic.

The discovery came as something of a surprise as this area is actually one of the farthest points from any sea and would have been like that in the Late Triassic as well. However at the time many sharks were not the fierce predators that we see today but actually small, harmless fishes which lived in rivers and lakes.

The team found the tips of a large number of tiny 1mm teeth from small juveniles together with the imprints of egg capsules from two species of shark. One species was a type of shark known as hybodontids which went extinct at roughly the same time as the dinosaurs whilst the other type – a xenacanthid – didn’t survive beyond 200 million years ago.

Lead author of the study, Jan Fischer of the Geologisches Institut, TU Bergakademie Freiberg, remarked that:"The chemistry of the tooth enamel indicates that the Madygen nursery was unequivocally created in freshwater, which is in sharp contrast to all modern egg laying sharks, which spawn exclusively in the sea." 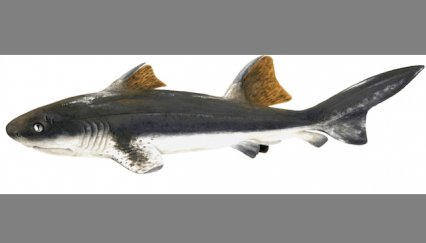 Fossil sharks are generally rather rare due to their cartilaginous skeleton, so the team were delighted to make their find. Co-author Michael Buchwitz said: "The fossil record of sharks is no laughing matter; a spine here, a tooth there, or three miniscule denticles (small spines of the skin) picked from a 10 kilogram sample. Therefore, dozens of egg capsules alongside juvenile teeth in one deposit is a dream come true!"

Only a very small number of adult teeth have been discovered suggesting that the adults spawned in the shallow waters but did not stay there. The team are now fascinated to establish if adults remained in nearby freshwaters or migrated long distances to reach this area.

For more information seethe paper: FISCHER, J., et al. 2011. A Selachian Freshwater Fauna from the Triassic of Kyrgyzstan and its implication for Mesozoic shark nurseries. Journal of Vertebrate Paleontology 31(5)