The predator next door. The horror? Nathan Hill investigates the potential for prey fish to sniff out their worst fears in recirculating fish systems.

Imagine being locked in a small room. You’ve got an air vent pumping in and out of your environment, bringing with it all manner of aromas. You get a whiff of curry, which is nice. A bit later you get a whiff of chocolate. After that you get you get a smell of an enormous wet dog. You’re apprehensive. More smells follow. You recognise human blood, the stinky aroma of cortisol, and more strong animal scents. By now, you’re probably more than a bit nervous.

Something akin to this could be happening every day in systems around the world. I say could, because the issue is a lot more complex than it first appeared to me.

Zoos are wise to the power that smells can have on their animals. You’ll notice pretty early on that things like lions are kept well away from gazelles, and for good reason. Gazelles and other prey animals have a remarkable sense of smell for detecting the unusual and the predatory. Any deerstalker or rabbit hunter will tell you that you need to approach in to the wind. If those animals get a hint of your delicious Old Spice carried on the breeze, they’ll be gone in a flash.

Fish work on olfaction, too. In fact, fish have tremendous smelling ability. Need I mention the legendary powers of sharks in picking up on droplets of blood from almighty distances?

Recently, I was working on an Oscar piece when I stumbled across the most fascinating old paper 'Alarm Substances and Fright Reaction in Some Fishes from the Southeastern United States' by James Reed (1969). In this paper, several American natives were subjected to the smells of various predators, including the non-native Oscar, as well as the Severum.

So, what was the outcome of the paper? Well, the fish subjected to nothing more than the smell of a predator showed fright reactions. They’d freeze in the water, or they’d elicit a fright reaction and try to escape. 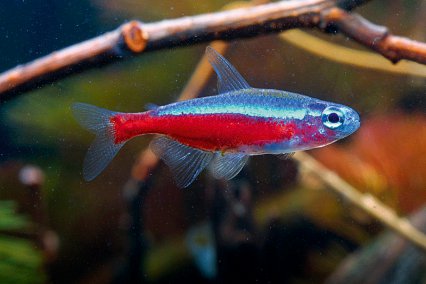 This got me to pondering. Is the smell of the Oscar so powerful it can drive other, smaller fishes to terror without even being seen? If so, what could be the long term implications? Surely a fish subjected to a chronic stressor is a fish that will eventually develop compromising issues with its immune system, through the relentless production of corticosteroids, no?

In all honesty, to these questions I have to concede that I don’t know. Unfortunately, further experiments involving Oscars and Severums appear to be either elusive or absent.

I decided to invoke the authorities so I dropped lines to Dr. Ashley Ward who has done some work in this area, Dr. Lynne Sneddon, and Dr. Peter Burgess. Their answers too could be summed up with an understandably cautious ‘not enough evidence’.

Dr. Sneddon has done some interesting work in this field, and tells me that; "most fish do not respond to predators unless they learn that they are dangerous by seeing and smelling them eating a conspecific.

"It's very species specific and often an alarm substance from a different species has no effect on behaviour."

So, from the perspective of fish just innately recognising the smell of a predator it has never had any dealings with, the current evidence is not strong. In fact, Dr. Sneddon sums this position up nicely when she tells me that: "fish that have never come into contact with a predator and are exposed to their smell may not have learned what that means - it does seem alarm substance and predator together is required for the fish to learn of the danger."

Dr. Ashley Ward also builds on this when he tells me: "prey fish can certainly recognise predator chemical cues. But this is much more likely to be the case when they are sympatric.

"Naïve fish could learn that another, unidentified fish in their habitat is a threat, but this usually happens when the smell of the predator is coupled with the smell of what are sometimes referred to as alarm cues – the chemical cues released when a fish is eaten."

So, thus far my concern for prey fish living in abject terror in recirculating systems is in a weak position. But there’s more to the tale yet.

Referring to the alarm cues that fish release when eaten by a predator, Dr. Ward goes on to say that: "If the shops are feeding their predators with other fish, then this is what would happen and therefore it might induce some stress in the other prey fish." 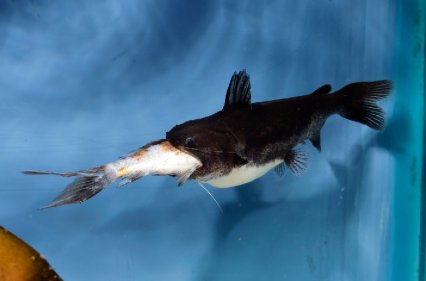 So, at the least we have the potential for fish to become stressed if sick tankmates are dispatched by being dropped into a sump with ravenous catfish, or glutton mouthed cichlids. The released smells from their demise could quite easily spread through the rest of the system, alarming others.

The research that I’ve been given so far always refers to naïve fish (fish that haven’t come across a predator and built the fear reaction) learning to smell predators. That’s great for all of our farmed fish, and fish from breeder tanks that have had an opulent, risk free life. But what of the wild fish?

Here I think my hypothesis might have a little more mileage. Wild Cardinal tetra know all about the predatory cichlids and catfish in their environments, and they can likely smell most of them at a fair distance.

So knowing that fish that have evolved a fearful smell reaction for sympatric predators, do we want to stick them into a system where those very predators are being housed? A prey fish imported from the Amazon, say, and plopped into a system two tanks along from its natural predator from the same source is almost certainly going to catch a hint of that fish as its aroma works through the system. 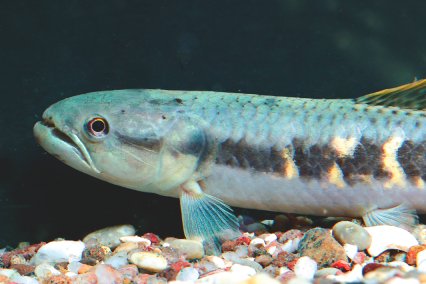 Is this stressful? I don’t know. I don’t know because there’s not enough evidence to support it, and I don’t want to fall back on dirty, dirty anecdote to make my case. So as much as I might be able to cite cases where I’ve had stores telling me that farmed fish are hardier in their recirculating systems, only to have a whopping great freshwater barracuda or Hoplias lurking in that very system is inadmissible as evidence.

Even Dr. Ward shoots my point down a little bit, too. He politely informs me: "I think we have to remember that these prey fish spend their entire lives in close proximity to predators in the wild – that’s normal to them."

So currently I have nothing but food for thought. But what I’d really like would be feedback from aquarists and retailers, especially those who have worked with both open and closed fish systems. Have you anything to add to this? Have you noticed that certain prey fish do poorly on systems when predators, natural or otherwise are kept on the same bank?

It may not be the biggest issue to face fishkeeping, but ultimately, if there’s something in the idea that fish can sniff out and become stressed by their enemies, as indicated in the Reed paper, then I guess we can come at least that one step closer to keeping our fish in a worry-free environment by rethinking our stocking options.

But for now, all I can say is 'not enough evidence', which is a real shame.