Researchers have shed light on the private life of a new species of deep-sea crab, nicknamed the 'Hoff' crab in reference to the American actor/singer David Hasselhoff, because of its hairy chest.

Male and female Hoff crabs lead largely separate lives at volcanic vents 1.5 miles (2.4 km) deep on the ocean floor near Antarctica, because of the conflicting demands of feeding and raising young among the sexes.

In 2010, a British expedition revealed a 'lost world' of deep-sea animals thriving around volcanic vents on the ocean floor near Antarctica. Among the many new species of deep-sea creatures was a hairy-chested crab. Using a deep-diving remotely operated vehicle (ROV) to examine the distribution, size and sex of these crabs at the vents, Dr Leigh Marsh and her colleagues at the University of Southampton have now pieced together their private lives.

"The life cycles of deep-sea animals have been largely hidden from us until now," says Dr Marsh, "but thanks to more frequent expeditions and advances in technology, we are getting a clearer picture of the natural history of the ocean depths that cover most of our world." 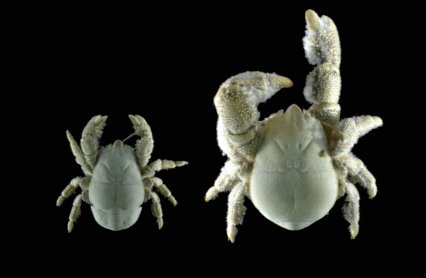 The researchers found that large male Hoff crabs (pictured above right) live highest on the mineral spires of the deep-sea vents, closest to the hot fluids that jet from them. At the base of the mineral spires, smaller males mingle with females in spectacular piles, many crabs deep, where they get together to mate. The females then crawl away from the bustling piles of crabs and the warm mineral-rich fluids seeping from the seafloor, which can be toxic to their young.

Away from the mineral spires, the few crabs found by the researchers were all females, carrying developing offspring under their curled-up tails.

Moving away from the warmer waters of the spires takes the females across a gauntlet of predators, such as large sea anemones and seven-arm seastars. Away from the vents, the cold water of the deep Antarctic also slows down the metabolism of the adult female crabs, making them less active than in the warmer waters of the jostling piles. However, the conditions away from the vents may be more stable and less harmful to their offspring for their early development, making the journey of the females worthwhile.

Males, meanwhile, don’t share in "child-care" arrangements with the females, and instead can climb up the mineral spires of the vents to take advantage of the warmth and conditions best suited for growing bacteria on their hairy chests. By scraping off and eating these bacteria using comb-like mouthparts, the males can grow much larger than the females.

The study is published in the Journal of Animal Ecology.