The Big Fish count is on! Public aquariums around the country are about to embark upon their yearly fish count.

According to The Enquirer, Sea-Life Adventure in Southend has to go through an annual count-up of all its livestock. This is to record and keep track of births, deaths and transfers, a necessary audit for zoos and aquariums under the Zoo Licensing Act.

As one can imagine, this is a remarkably difficult task!  There are crabs, corals, sharks, anthias, angelfish and dozens of others in need of being counted. 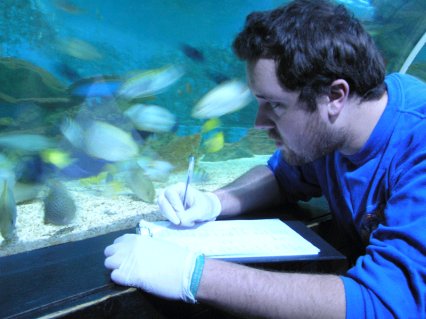 To count the fish, they are first fed, then photographed. Using the pictures staff then count up the numbers of fish and total it all up.

"We have to count some fish two or three times as they are so quick, it’s quite a challenge!" remarks David Knapp, Sea-Life Adventure’s Curator and Chief Counter.

A number of other aquariums around the country will also be busy counting. Dr David Gibson, director of husbandry at The Deep in Hull commented to the BBC: "Some of the animals we have in the aquarium are really simple to count - a 3.5m-long (12ft) shark, for example. But the problem comes when you have the schooling species that look identical."

Like Sea-Life Adventure, Hull will be counting the fish numerous times to ensure accuracy. "A member of staff will be assigned to a particular species, like the Horse-eye jack, and they will stand at the window of the tank and use clicker counters to count the number of fish in the school that they see at any one time," explains Dr Gibson.

However, there is hope for the aquatic records yet! The public can help in the big fish count at Sea-Life Adventure in Southend, just make sure you get there before January 19 and volunteer yourself to a member of staff.