A deep sea squid with a penis as large as its body and tentacles combined has revealed the secrets of how the giant squid mate in the twilight of the ocean depths.

The greater hooked squid Onykia ingens was caught by scientists from the Falkland Islands Government Fisheries Department during a deep-water research cruise on the Patagonian slope.

Dr Alexander Arkhipkin one of the lead scientists explained in a BBC interview: "We took the animal from the catch, and it was very weak with arms and tentacles still moving. When the mantle of the squid was opened for maturity assessment, we witnessed an unusual event."

"The penis of the squid, which had extended only slightly over the mantle margin, suddenly started to erect, and elongated quickly to 67cm total length, almost the same length as the whole animal." 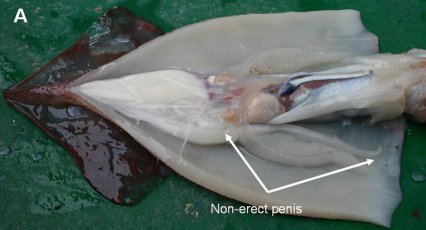 Prior to this whilst the courtship and mating of shallow-water cuttleï¬sh, octopuses and squid have been ï¬lmed and well documented by divers and remotely operated vehicles , relatively little was known about what happens during mating of deepwater cephalopods.

This finding goes some way to discovering how male deep-sea squid inseminate females; they use their huge penis to shoot out packages of sperm, injecting them into the female's body.

All cephalopods have to adapt their mating techniques due to the shape of their mantle which covers the body and head. The mantle is used to move the squid via jet propulsion and hides the animals’ excretory and sexual organs meaning that males have had to adapt a method of getting the sperm past the mantle.  In addition females can grow to up to five times the length of a male.

Shallow water cephalopods have short penises which produce packets of sperm called spermatophores which a specially modified tentacle then transfers to special receptacles on or in the female. Deep-water male squid however lack this modified limb, and are thought to somehow inject their sperm into the female's body. Prior to this expedition, scientists had come up with various ideas as to how this was achieved, including shooting the spermatophores hydraulically from a distance into the females!

The squid uses its lengthy organ to reach into the body of the female, and it then injects the sperm directly to prevent it being washed away. It still remains a mystery, however, how the sperm injected into a female's body then reaches her reproductive organs. Although one suggestion is that it may circulate in the cephalopod's blood, just as it does in the bodies of gastropods - snail-like molluscs that are distantly related to cephalopods.

This study means that deep water squid now enter the un-official animal book of records in having the greatest known penis length relative to body size of all mobile animals, second in the entire animal kingdom only to certain sessile barnacles.

Of course we all know that size isn’t important, boys…