Alex Chang Kuok Weai, an employee of Qian Hu ornamental fish farm in Singapore, has appeared before an Australian court on Monday, writes Nathan Hill. He is charged with the smuggling of endangered fish.

The charge relates to activities on 2nd February, when he was arrested by Australian Customs and Border Services Protection (ACBPS) officers after a flight from Singapore. He was found to have concealed 20 bags of fish inside his luggage. Inspection of these fish – some alive, some dead – revealed a number of endangered species with a value estimated between Aus$235,000 and $300,000. (£120,000 and £154,000)

One image released by the Australian Customs and Border Protection Service shows a bag of seven Panaque, possibly Panaque nigrolineatus, though these are not a CITES controlled species.

Alex was arrested and subsequently appeared in Adelaide Magistrates court, where he was remanded in custody.

Some 26 of the fish found are reported as listed under the Convention on International Trade in Endangered Species of Wild Fauna and Flora (CITES), and prosecutors noted in court that many of the fish had been micro-chipped, which is standard practice for many rare species in Asia. 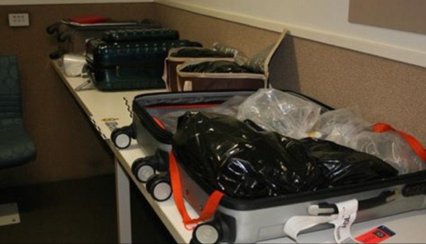 Further investigation revealed Alex's wider links to this trade, and on Thursday, 5 February 2015, ACBPS officers working in partnership with the Department of Agriculture, the Department of Environment, and the Department of Primary Industries and Regions South Australia, executed search warrants at two addresses in Adelaide.

During these warrants, more CITES listed fish were located, including one Asian Arowana, valued at almost Aus$30,000 (£15,000). The owner of these premises was also arrested and, bailed to appear in the Adelaide Magistrates Court at a later date.

The subsequent search of the two properties triggered further investigations, leading prosecutor Elim Chan to ask for “longer than usual adjournment so these could continue.

“There are international investigations under way and the current charges may well not be the final ones,” she said.
ACBPS Regional Commander Central Region, James Watson, said: “These arrests should send a strong message to anyone involved in wildlife smuggling; Customs and Border Protection is serious about working with our law enforcement partners to target you.”

Alex could now face a penalty for wildlife trade offences under the Environment Protection and Biodiversity Conservation Act of up to ten years imprisonment and $170,000 (£87,000) penalty. That penalty can increase to up to $850,000 (£436,000) for corporations.

A Qian Hu spokesman has said: “Alex was on annual leave when he visited Australia in his personal capacity. We are not in a position to comment as this case is in the hands of the Australian authorities.”