Shocking video: How many sharks died for this? Shark fin soup is popular with the wealthy in China as a delicacy, and is served at celebrations, but finning is a horrific practice with the unfortunate sharks being thrown back into the ocean to die after having their fins hacked off with a machete. The business is estimated to kill as many as 100m sharks every year. 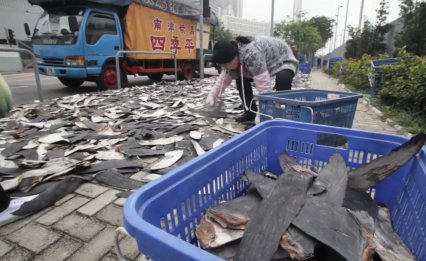 The video below by film maker Gary Stokes shows fins lying all over the pavement by a busy main road, left there for airing and sorting. People are shown collecting them up into baskets and ignoring questions from the English reporter.

Recent reports have shown that eating shark fins may carry an increased risk of developing neurodegenerative diseases in humans, including Alzheimer's and Lou Gehrig Disease (ALS) due to the high levels of the neurotoxin BMAA (N-methylamino-L-alanine) in fin samples taken from sharks.