Sharks see everything in black and white The results of a new study could help to save the lives of both sharks and humans.

Research team leader Assistant Professor Nathan Hart from the UWA Oceans Institute and School of Animal Biology said the study is important to understand how sharks view the world.

"The results from this study will help us not only to understand the evolutionary selection pressures operating on shark vision, but may also provide to key to how we can influence their behaviour.

"Sharks are highly visual animals, but the world they see lacks colour and will appear as shades of grey like we see when we watch a black and white movie. It may be possible to use this knowledge to change the way a shark reacts to certain objects.

"For example, it may be possible to design long-line fishing lures that are less attractive to sharks to reduce the incidence of shark bycatch. It may also lead to better design of equipment such as wetsuits and surfboards that reduce the risk of shark attack." 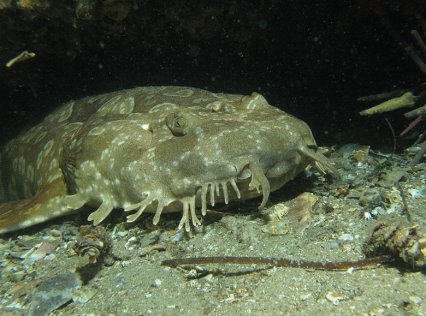 The research looked at the visual adaptations of two species of wobbegong sharks Orectolobus maculatus and Orectolobus ornatus, also known as carpet sharks.

Wobbegongs spend most of their time on the sea floor and hunt mostly at night using an unusual sit-and-wait ambush strategy.

In many animals, more than one type of cone is present in the retina, some of which are sensitive to different parts of the visible spectrum of light.

The nervous system can compare these signals to distinguish colours.  However, if only one cone type is present, there is no possibility of colour vision.

Building on this research from last year, researchers isolated the genes that encode the cone visual pigment proteins and found that only one cone pigment gene was present.

The group is hopeful that it will be able to secure further funding to develop shark deterrent devices to respond to concerns raised by the recent spate of shark attacks in Australia.