Save coral by preserving forests first 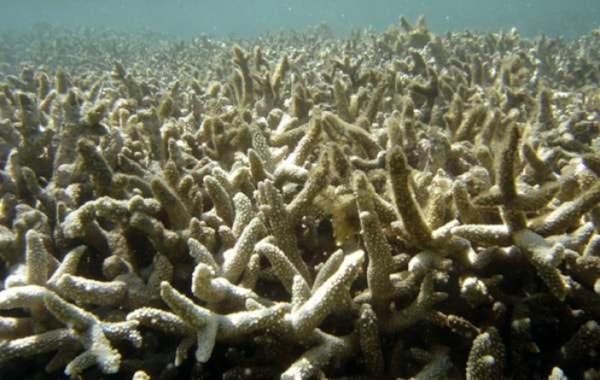 Coastal coral reefs can be saved by combatting local deforestation first, rather than global warming, claims a new study.

The study, led by Joseph Maina of Macquarie University in Sydney, reveals that sediment spread downriver by land devoid of trees can cloud water and deplete light for coral communities near-shore.
The sediment covers the corals which forces them to use more energy, increasing the risk of 'bleaching' and die-out.
Maina led a team that ran a computer simulation of four river systems in Madagascar with outflows impacting local coral ecosystems.
By 2090, global warming will have a large effect on those watersheds, reducing rainfall, therefore lessening the amount of sediment that makes its way into the sea.
Deforestation, however, outweighs the declines stemming from climate change.
In Madagascar, deforestation has increased river sediment by five times since initial human settlement.
The volumes of sediment could be reduced by as much as 68 per cent if between 10 and 50 per cent of forest is restored, says the study.
According to the paper, planting new forests "offers promise for sustainable environmental outcomes in the face of climate change in one of the world's most important biodiversity hotspots."
Scientists say warmer seas, overfishing and habitat loss are major threats for corals.
A quarter of reef-building corals are in danger of extinction, according to the 'Red List' of threatened species put together by the International Union for Conservation of Nature (IUCN).