The first was found clinging to a crab pot by St. Mawes fisherman John Hayse, who was checking his pots six miles off Falmouth.

He took the curious crustacean to the aquarium where staff confirmed its identification as a Slipper lobster (Scyllarus arctus), a rare visitor to British waters more typically found in the Mediterranean and eastern Atlantic.

The 12cm/4.5' long  lobster has been named 'Popeye' because of its prominent, orange eyes.

The tank-like Slipper lobster is not a true lobster and is instead more closely related to crayfish, lacking the prominent claws of its name-sake. They spend their lives foraging for molluscs and bivalves on the sea floor, protected from predators by their heavy armour or by burrowing into the substrate, as they are unable to propel themselves with their tails like many lobster species. 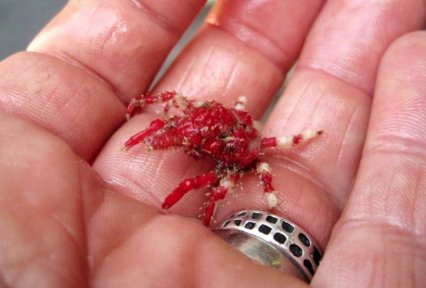 At the same time Newquay fisherman Dan Gilbert gave the aquarium a rare Gibb's Spider crab (Pisa armata), the third specimen he has caught in a month. Previously the species had not been recorded in British waters since 1912.

When the first specimen was brought in last month the aquarium staff were baffled as to just what it was, so they sent photographs to Cornish marine life expert Dr Paul Gainey for identification.

The tiny crabs are little more than a few centimetres across fully grown, and like the Slipper lobster are more typically found in warmer seas than those found around the UK.