The sales figures are in and it's official - Practical Fishkeeping magazine increased its audience last year and is growing at a phenomenal rate both in print and digitally throughout 2012.

Britain's biggest and best fishkeeping magazine first started in 1966 as Pet Fish Monthly and relaunched as PFK in the late seventies.

"Practical Fishkeeping has gone from black and white in the early days to the massive multi media platform it is today, and we're thrilled with the news."

Bigger than Corrie and Gaga
The PFK brand now goes out to a global audience of millions via the printed magazine, PFK website, Facebook fan page, two twitter feeds and a weekly digital newsletter.

At over 1.6 million views the "Arowana, Flowerhorns and Parrot cichlids" YouTube video has been watched more times than a recent Lady Gaga VEVO news interview, and at over 6.7 million total upload views, more people have viewed our fishkeeping videos than watched Coronation Street's "Farewell Becky" episode in January this year!

All this is a really positive boost for fishkeeping and the hobby in general, and the team here at PFK is really pleased that fishkeepers associate us with their hobby so readily.

Most of all we would like to thank everyone who has bought the magazine, logged in or registered, supported us and contributed to our overall success. We love fish and we just want to circulate information to others who feel the same as we do. 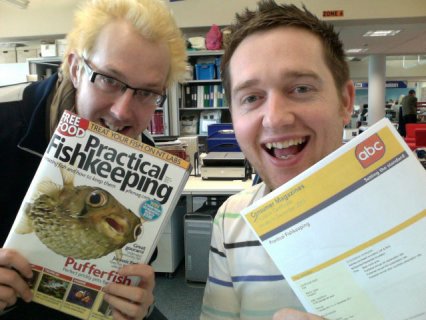 About ABC
The Audit Bureau of Circulations (ABC) is the industry body for media measurement. Established in 1931, a team of expert auditors check figures for print, digital, events and evolving platforms.

Measuring reach is all about taking a census approach which means counting rather than using a survey sample, and reputable magazine and newspaper companies use ABC to independently verify media owners' claims against clear and open industry-agreed standards.

Advertisers take note: Without ABC, spurious claims of readership figures may be purely made up and PFK has seen some recent competitors close or simply fade away, despite claims of doing well right until their deaths. Always ask to see their actual ABC certificate.

A winning formula
A combination of the right subject matter, the best fish and photos, independent, objective reviews and world class experts is what we think sets PFK apart.

By cleverly balancing content for experienced fishkeepers and industry professionals, with advice that can cater for absolute beginners, we retain die-hard fish keepers while also encouraging newcomers.

We actively encourage our readers to get involved, and become paid contributors too.

We've got some exciting plans for PFK in the future so why not login, go out and buy a copy of the magazine, or subscribe and join our growing community.