Police seize sword made from snout of sawfish Police found a home-made weapon made from the 'saw' of a sawfish, following a disturbance in West Australia.

They were called to an address near Karratha, following reports that a man had been seen brandishing a sword.

When they arrived the man wasn't armed but he was allegedly abusive and then became violent, kicking an officer in the head when he was arrested.

Following a search of the area police discovered the weapon, made from the toothy nose extension of a sawfish. It measured around 45cm/18" in length and was described as very sharp. 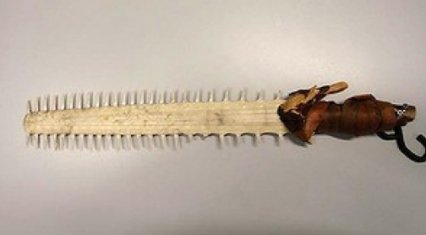 The saw had been attached to a wooden handle to turn it into a makeshift sword.

The man was charged with assaulting a police officer, obstructing police and disorderly behaviour. His home-made weapon was seized and will be disposed of.