A small but active aquarium club in North Yorkshire celebrated its 30th year by holding a â€˜Pearl Celebration' where everything was about the fishkeepers rather than their fish.

Fifty members and their visitors attended Rydale Aquarist Society's celebrations on March 29 at the Kirby Misperth Village Hall. Although an Open Show was included — with only 10 Classes, but with 71 entries — there was only one judge, who pointed the fish and no cards or cups were presented.

The highest pointed (85.12) was a thorny catfish, Anadoras grypus (pictured above) owned by Mike Kirkham of AAGB.

The members were entertained with two lectures, a quiz, an auction, tombola, grand prize draw and a free buffet. Visiting stands included The Catfish Study Group, The Anabantoid Association of Great Britain, The Aquarium Gazette, and Mars Fishkeeping with Aquarian and the new API Fish Foods.

President of the Catfish Study Group, Ian Fuller, gave his personal methods of keeping, spawning and raising many species of catfish. The audience learnt things that they did not know about these species and were given many tips on their feeding, water management and treatments.

Dr David Ford of Aquatic Services then lectured on ‘The History of the Aquarium’. He showed the traditional tank’s origins in the Clipper Ships of the British Empire through to their Aquaponics future in the Human Colony planned for Mars. How the little square tanks of Victoriana grew into the 49 million litre Hengqin Ocean Aquarium was also shown.

The auction was run by Steve Jones of the Yorkshire Association of Aquarist Societies and that lone judge was Steve Grant of Castleford AS, to YAAS rules. 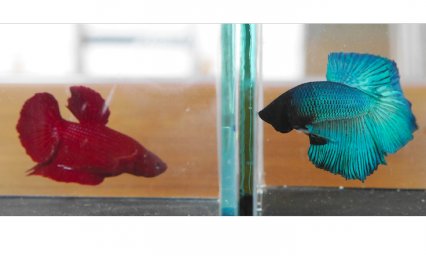 One of the Firsts was a Betta (81.5 points) pictured above on the right, victoriously displaying to a losing neighbour…

Ryedale Aquarist Society's next Open Show will be on Sunday, June 14 at Kirby Misperton Village Hall — (YO17 6XN). The OS will be back to 40 classes and prize giving!