Dr. Herbert Axelrod has died at the age of 89. Nathan Hill looks back on the life of the ichthyologist, author, explorer, entrepreneur, philanthropist and publisher with a controversial history, who once dominated and then receded from the hobby.

The author and publisher Dr. Herbert Richard Axelrod passed away at his Swiss home on May 15, 2017, with tentative reports trickling out over the subsequent days — articles from online Violin publications followed word-of-mouth announcements between friends of those close to him. In most camps, the news has been greeted with sadness, while some of those with whom he collided throughout his life have been less morose: in death, as in life, Axelrod is divisive.

Axelrod’s history is as coloured as it is cloudy. Sections of his youth are undocumented, while periods of his adult life lack corroboration.

He was born June 7, 1927, the son of Russian Jewish émigrés. His mother worked with the US Navy Procurement Office, while the interests of his father, a violin and maths teacher, would have great effect on Axelrod’s own life choices.

Little is known of his school years, though there are hints of adventure. At 10, it was claimed that he swam the fifteen-mile width of Lake Ontario; a suggestion of the derring-do that would drive him through life. His family wasn’t a wealthy one, and Axelrod would gain a little spending money catching crabs and selling them to Chinese laundrymen. He had an obsession with pigeons, the messy nature of which led to angry landlords ousting the family from their lodgings.

At 17, Axelrod joined an Army Specialised Training Program to study a pre-medicine course. By the age of 23 he was serving in the active war in Korea, assigned to a M*A*S*H unit.

It was during this time that one of his first, dramatic claims arises. Whilst in Japan, dropping off blood and collecting whisky to trade with his fellow servicemen, he had a chance encounter with an ichthyologist in a Tokyo library, Dr. Takiharo Abe. After Abe introduced him to a book by Emperor Hirohito — an ardent marine biologist — Axelrod pointed out an error in the scientific name of a nudibranch. It turned out that Abe was well connected, and cleared a pathway for Axelrod to meet the Emperor Hirohito. On orders from his military commander to respond to an invite from the Emperor himself, Axelrod and the Emperor then spent a week together collecting the nudibranchs of which the Emperor was fond.

During his Korea years Axelrod received an unspecified wound to his hands, which in turn drove him to the career with which we fishkeepers mainly associate him. In an attempt to restore his dexterity, he took to typing, directing his words at a subject he knew and loved — fishkeeping.

Returning from Korea, Axelrod eventually completed studies for his Ph.D in Biostatistics, to join his Master’s degree in Mathematics. During this time, he claimed to have attended lessons given by Albert Einstein, who was at that time teaching lattice theory at nearby Princeton. The timescales and geographies of the parties involved make this more than plausible.

Among his titles, several of which are still found as reference books sold and used by retailers around the world, is his Handbook of Tropical Aquarium Fishes, which may represent one of the most successful fish books of all time, selling well in excess of one million copies globally. Dr. Axelrod’s Atlas of Freshwater Aquarium Fishes, last printed in 2004, probably still ranks as the most recognisable fish title for aquarists.

Publishing wasn’t Axelrod’s only source of income. As time progressed he invested in fish farming, owning no less than five tropical farms near Tampa, as well as inventing scores of products we take for granted today. Freeze dried worms, for example, were originally an Axelrod concept. Dog owners may be surprised to find that the Nylabone their pets are chewing was also one of his creations.

TFH also afforded Axelrod some personal indulgences, such as the sister publishing company Panganiniana, producing musical-themed publications that allowed an outlet for Axelrod’s love of violins. Throughout his life, he was an amateur violinist, as well as a collector and trader of rare violins.

The runaway success of TFH Publications afforded Axelrod free time to do what he pleased, and what pleased him was exploration. With energy to spare and ample funding, he ventured around the world, starting with the rainforests of South America. While seeking out fish, Axelrod still found time to brush shoulders with extraordinary characters. In 1960, he took the former King of Belgium, Leopold III, on a spear-fishing expedition into the Amazon. Somewhere in the late 1950s he procured Jaguars for Walt Disney. The Jaguar brief was for two black cats — potentially those seen in Disney’s ‘Jungle Cat’ (1959) — but given that Axelrod couldn’t find any truly black jaguars, he trapped and sedated a normal one, before hurrying it to a Manaus hairdresser for an all-over dye. There was even mention at one stage that Axelrod advised Churchill on goldfish, though this does seem to have been refuted.

The mid-1950’s marked the beginning of another of Axelrod’s fishkeeping legacies — the number of fish named after him. Regardless what genera of fish you keep personally, chances are that Axelrod’s hand is somewhere in your collection. 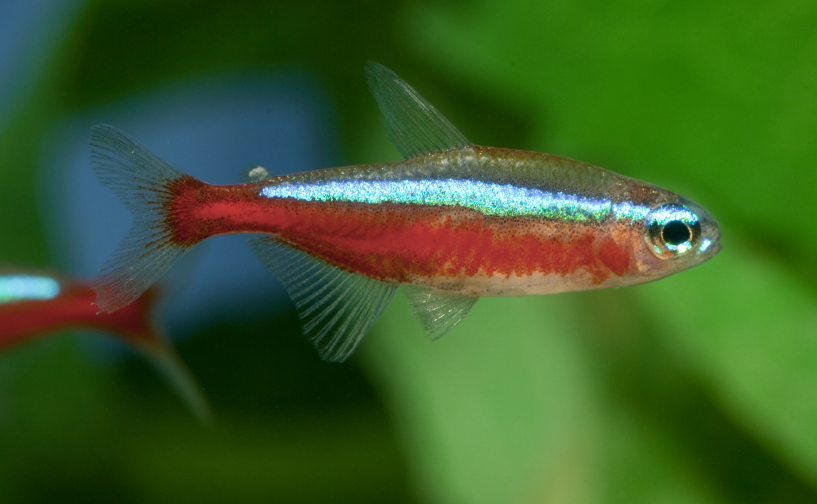 The first fish named after him was both the most famous and the most controversial. The Cardinal tetra, Paracheirodon axelrodi, a fish known of since 1953 was due to be described by Drs. George Myers and Stanley Weitzman in the University of Stanford Ichthyological Bulletin. Allegedly finding Cardinals in a local retailer, Axelrod bought some of the fish and gave them to L. Schultz for a hasty description, which then appeared in an article in Tropical Fish Hobbyist one day before the publication of the Bulletin. In keeping with nomenclature laws, the first published name takes precedent, and the fish we have gained its name from Schultz’s description. It was, by a factor of just one day, originally to be Hyphessobrycon cardinalis.

Axelrod’s fish discovery years were prodigious, bringing hundreds of new species to the hobby. 16 species and one genus are currently named after him, though there were more. At one stage, he had a Discus named after him; lost to a taxanomic clean up. As well as journeying to find fish firsthand, it was Axelrod’s benevolence that funded the likes of Dr. Jacques Gery and Dr. Martin Brittan to trek for new and exotic species.

It was Axelrod, along with Willi Schwarz, who set up the Cardinal tetra industry of Barcelos back in the 1950s. Given that the Cardinal accounts for 80% of artisanal fisheries in that region, Axelrod’s impact on the region and its subsequent conservation was great. In recent years, Project Piaba continues the legacy of Axelrod — a project he donated heavily to in the 1990s, leading to the development of the Centre for Aquatic Conservation. Reportedly, Axelrod was once asked by the then President of Brazil, Humberto Castelo Branco, to help draw conservation plans for wider swathes of the Amazon.

Charity and philanthropy was a recurrent theme in Axelrod’s long life. In 1989, he donated fish fossils to the University of Guleph; at the time, likely the single largest donation ever received by a Canadian University. Six months later they had established the Axelrod Institute of Ichthyology in his honour.

He was busy donating to the violin world, too. Over his lifetime, he built up one of the largest collections of Italian violins, loaning them to virtuosos as he saw fit. Within music circles he donated tens of millions to orchestras, operas and academies. In 1997, the Curtis Institute and New York’s Juilliard School hosted a party for his 70th birthday, at Carnegie Hall, and with an all-star cast.

In 2003, donations to museums in Vienna brought him the gift of Austrian citizenship, which he later put to use during a darker phase of his life.

His philanthropic fame — he was once ranked as one of the top benefactors of America in the Chronicle of Philanthropy — was overshadowed in April 2004 when Axelrod became a headline name for a different reason: He had been indicted on charges of conspiring to defraud the US government. It was alleged that he had filed false tax returns, as well as diverting money into a Swiss bank account. The aquatic and violin worlds collectively clammed up in horror.

Axelrod failed to appear in court — he’d instead travelled to Cuba where he pleaded no wrongdoing with journalists who tracked him down. With a warrant now against him, he travelled Europe as a refugee, using the Austrian passport he had gained through his philanthropy. Authorities caught up with him in Berlin’s Tegel Airport, and after six months in a German prison he was extradited and imprisoned in New Jersey. He pleaded guilty to a charge of tax fraud and was handed an 18-month sentence, of which he served 16 months. He was also fined $40,000.

This was far from the first time that Axelrod had engaged in legal antics. As early as 1965 he’d already been sued 14 times. His strategy was to countersue, and he almost always won. Only his first case, involving the unauthorised use of images taken by William T. Innes in a TFH-published book was lost by him. Even here, the case left him relatively unscathed — Innes was awarded almost nothing as it couldn’t be shown he’d substantially lost anything.

In Axelrod’s own admission, there was a thrill to the litigation process, with winning bringing him, it was said, as much joy as the discovery of a new species of fish.

As an individual, Axelrod — ‘Herb’ to his friends — garnered both admiration and resentment from the fish world; perhaps it’s a sin to be financially successful in aquatics. Numerous rumours and allegations surround his fishy antics — none of which come backed with evidence, however.

Indisputable is the enormous role he played in forming the hobby as we see it today. While it was stale and tired before the addition of Axelrod, he brought a wealth of colour and variety to fishkeepers everywhere, in print and flesh.

One seminal work on the early years of Axelrod’s life refers to him as a ‘panjandrum’. Fast forward fifty years, and that word is replaced with a less than flattering adjective ‘picaresque’.

On one of the rare occasions he commented on his own life, Axelrod was on record after his conviction in 2004 as saying: "It was always my goal to be remembered as an outstanding philanthropist. That's all gone. Instead, I will be remembered as a person who disrespected his country, his government, the law and this court. It is the biggest mistake of my life."

Whether we remember him as philanthropist or not, his mark on fishkeeping is indelible and one that deserves the widest recognition. Perhaps — just perhaps — he was the singlemost influential fishkeeper the hobby and industry has seen. 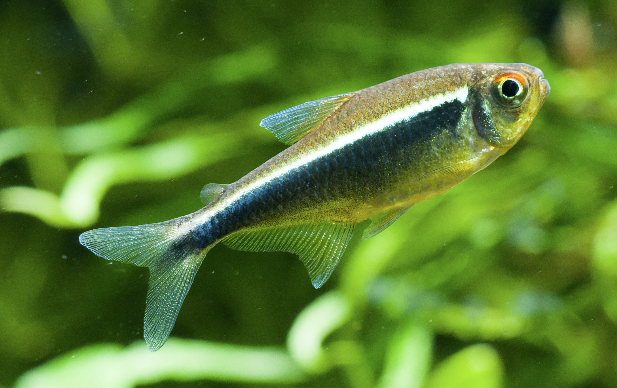