"Aquatic osteoporosis" is spreading throughout many North American soft water lakes due to declining calcium levels in the water and hindering the survival of some organisms, says new research.

Scientists from Queen’s University, working with colleagues from York University and the University of Cambridge, as well as other collaborators, have identified a biological shift in many temperate, soft-water lakes in response to declining calcium levels after prolonged periods of acid rain and timber harvesting. The reduced calcium availability is hindering the survival of aquatic organisms with high calcium requirements and promoting the growth of nutrient-poor, jelly-clad animals.

"Calcium is an essential nutrient for many lake-dwelling organisms, but concentrations have fallen so low in many lakes that keystone species can no longer survive," says Adam Jeziorski, one of the lead authors of the study.

The research team found that when calcium levels are low, the water flea Daphnia, which has high calcium requirements, becomes less abundant. 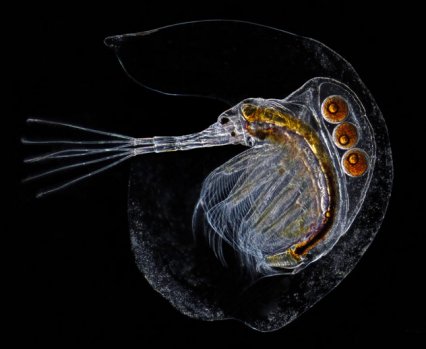 Importantly, this keystone species is being replaced by its jelly-clad competitor, Holopedium (pictured above by Ian Gardiner/E-Fauna BC).

"The study found that jelly-clad invertebrates have been increasing in an alarming number of lakes, likely as a long-term effect of acid rain on forest soils, logging and forest regrowth."

The increase these invertebrates can have important implications for lake biology, altering food webs, but can also clog water intakes.

Unfortunately, many lakes investigated by the team have passed critical thresholds.

The study is published in Proceedings of the Royal Society B.