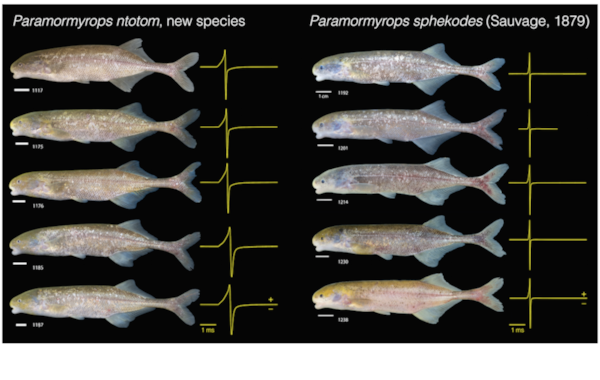 A new species of electric fish from the family Mormyridae has been described from the Ogooué River in Gabon, Africa.

Researchers at Cornell University have just published the description of a new species of weakly electric freshwater fish in the Zoological Journal of the Linnean Society. They’ve named it Paramormyrops ntotom.

The discovery of the new species was the unexpected result of revisiting the original collection site — or “type locality” — of another species described in 1879 and ‘listening’ to what the fishes themselves had to say about what species they belong to, coded in their peculiar electric pulses.

Coauthors Carl Hopkins, Professor Emeritus of Neurobiology and Behaviour, and John Sullivan, Curatorial Affiliate at the Cornell University Museum of Vertebrates, both study fish of the family Mormyridae (often referred to as elephant fish). These fish communicate by means of electricity produced from an organ near their tail (https://en.wikipedia.org/wiki/Mormyridae). These pulses are too weak to be perceived without the aid of specialised sensors (such as the fish themselves have), or an amplifier. Of particular interest are the many species in the genus Paramormyrops that live in the Ogooué River of Gabon that produce distinctive, species-specific electric signals.

Paramormyrops sphekodes was the first species of this genus to be described from two specimens collected by a French explorer in 1877 near a village called Doumé, situated beside a small cataract in the Ogooué River.

Since that time, this name has been applied to many specimens from Central Africa deposited in museum collections. But were these all really P. sphekodes? It wasn’t easy to tell. The genus Paramormyrops is now understood to constitute a ‘species flock’ in which many closely related species, similar in appearance, live together in the same region. Until this publication, no one had done a careful study showing how to distinguish Paramormyrops sphekodes from all the others.

“Until we knew which, if any, of the specimens in our recent collections were the real Paramormyrops sphekodes, we couldn’t easily go ahead with new species descriptions for fear of unintentionally describing this species a second time,” says Sullivan.

The type specimens of Paramormyrops sphekodes — those used for the original description in 1879 — reside in the National Museum of Natural History in Paris, but are in poor condition. What Hopkins and Sullivan needed were some fresh specimens collected from the type locality at Doumé to provide comparative material for their study. Collecting living fish would also allow them to record their electric organ discharges, or EODs, which often provide important clues to species identity. 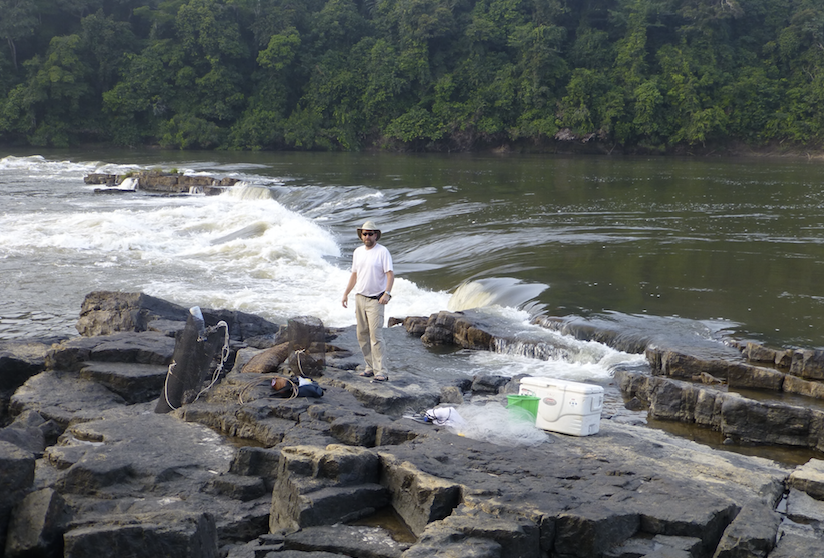 John Sullivan, Curatorial Affiliate in the Cornell University Museum of Vertebrates, stands with his fish traps at the 'chute' or falls of Doumé on the Ogooué River in Gabon, Africa.

Doumé remains a small settlement on an unspoiled part of the Ogooué river. Surprisingly, no ichthyologists had returned to collect fishes there since that first visit in 1877. Sullivan twice got the chance to visit Doumé and fish at night with earthworm-baited fish traps: once in 2011 and again in 2014 on an expedition sponsored by The Nature Conservancy.

What he found there initially only made things more confusing. Among the Paramormyrops collected that were good candidates for P. sphekodes were some with shorter EODs and others with longer EODs. “Without seeing the EODs, we could have easily assumed these were all the same thing,” says Sullivan.

Back at Cornell, careful measurements by Madeline “Maddy” Rich, Cornell College of Agriculture and Life Sciences undergraduate and first author of the paper, revealed very subtle differences between the two EOD groups in average body size and head proportions. Furthermore, DNA sequences Rich produced in the Fuller Evolutionary Biology Lab at the Cornell Lab of Ornithology provided evidence that these two groups do not interbreed.

The form with the longer EOD, larger body size and longer head proportions was a species Hopkins and Sullivan already knew informally as “SN4,” having collected it at sites up and down the Ogooué River. They had long suspected this species might be P. sphekodes. The other was new to them. It had been found only at Doumé and one other site nearby. So which of the two forms was really P. sphekodes?

Unfortunately, genetics couldn’t settle the question, since sequencing DNA from the preserved type specimens isn’t possible, at least with current technology. However when Rich, Sullivan & Hopkins plotted head measurements of the P. sphekodes type specimens alongside those taken from the new specimens, they found them to cluster with those from the shorter EOD form, not with the measurements from “SN4.”

Based on this evidence they determined that Paramormyrops sphekodes is a species they’d never encountered alive before sampling at its type locality at Doumé. This meant the other form, the one they knew as “SN4,” had yet to be described. In the new article, they not only describe Paramormyrops ntotom (‘ntotom’ is a word in the Fang language of Gabon meaning 'mormyrid fish'), but also provide a detailed re-description for P. sphekodes and a key to these and similar species so that ichthyologists need no longer be confused.

“This is a great example of bringing diverse kinds of data together to solve a difficult taxonomic question. It really demonstrates the usefulness of revisiting type localities and recording EODs for mormyrid fish taxonomy,” says Carl Hopkins. These original recordings, now in digital form, are being deposited in a special electric discharge collection in the Macaulay Library at the Cornell Lab of Ornithology.

“Lucky for us, these fish are constantly broadcasting their species identity electrically,” adds Sullivan. “It makes sense to tune in and listen to what they’re telling each other.”