Take a look at the newly described species of Peckoltia in the picture above. Star Wars fans may be able to see a likeness with one of the characters from â€œStar Wars: Episode IV â€“ A New Hopeâ€ (Lucasfilm, Twentieth Century Fox, 1977). We'll give you a clue: it's not Chewbacca. 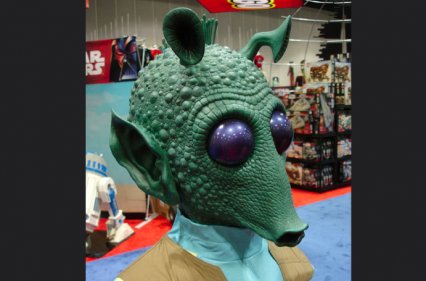 Jonathan W. Armbruster, David C. Werneke, and Milton Tan of the University of Auburn have named the new fish after the bounty hunter Greedo of Rodia (killed by Han Solo in Chalmun’s Spaceport Cantina) with whom they say it bears a remarkable resemblance. Something about those eyes, probably. (Picture of Grredo above by The Conmunity - Pop Culture Geek/Doug Kline, Creative Commons).

Anyway, Peckoltia greedoi was found in the Rio Gurupi drainage of Brazil. It reaches around 7.8cm in size and was one of three new species described recently described by the above experts. The others are Peckoltia ephippiata and P. lujani.