Scientists from the Smithsonian and partnering institutions have found a new species of eel in a fringing reef off the coast of the Republic of Palau possessing so many primitive anatomical features that it has been placed in its own genus and family.

The new eel, named Protanguilla palau by David Johnson and colleagues in the most recent issue of the Proceedings of the Royal Society B, lacks many of the more derived features found in the 19 families and more than 800 species of true eels in the order Anguilliformes.

Some of the features, such as the presence of a second upper jaw bone (premaxilla) and another bone in the upper jaw (metapterygoid), have only been found in fossil eels dating back to the Cretaceous (65 to 145 million years ago).

Other features such as the presence of gill rakers and fewer than 90 vertebrae, are not found in all eels, both fossil and living.

Evidence from an analysis of its entire mitochondrial genome also supports the fact that the new eel represents an ancient, independent lineage that has existed for at least 200 million years (which is about as long as the entire evolutionary history of the Anguilliformes).

According to lead author Dave Johnson: "The discovery of this extraordinary and beautiful new species of eel underscores how much more there is to learn about our planet. Furthermore, it brings home the critical importance of future conservation efforts — currently this species is known from only 10 specimens collected from a single cave in Palau." 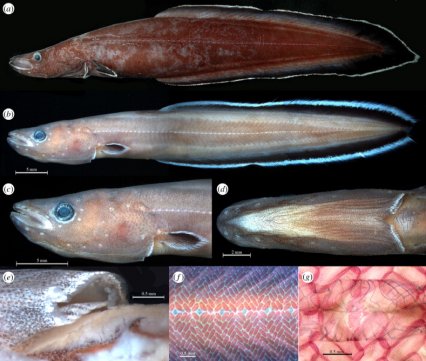