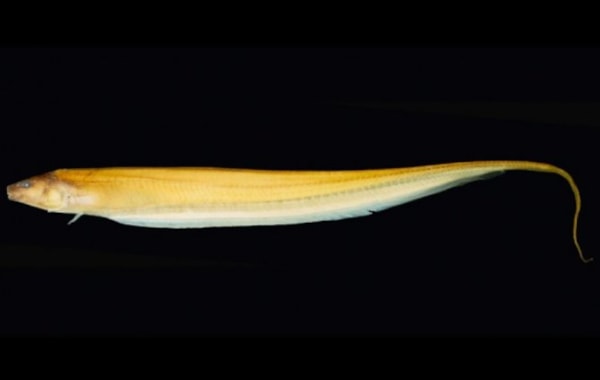 A new genus and species of electric knifefish has been discovered in several shallow tributaries of the Rio Negro in Brazil.

Scientists at the University of Massachusetts Amherst and the Instituto Nacional de Pesquisas da Amazônia (INPA), Brazil, describe the new Bluntnose knifefish, Procerusternarchus pixuna, in the current issue of the journal Proceedings of the Academy of Natural Sciences of Philadelphia.

Their paper offers details about the new genus and species’ anatomy, range, relationship to other fish, salient features of its skeleton, coloration, electric organs and patterns of electric organ discharge (EOD). These fish produce electric discharges in distinct pulses that can be detected by some other fish.

Professor Cristina Cox Fernandes of the University of Massachusetts Amherst says the discovery of this species is leading to a new interpretation of classifications and interrelationships among closely related groups. She adds that as the diversity of electric fishes becomes more thoroughly documented, researchers will be able to explore possible causes of this group’s adaptive radiation over evolutionary time.

Last year, Cox Fernandes co-authored a description of three other electric fishes. The authors provided details about the most abundant species of apteronotid, so-called 'ghost knife fishes,' another family of electric fish very common in the Amazon River and its large tributaries.

In the early 1990s, Cox Fernandes recalls, when she began her studies of the communities and diversity of electric fishes, fewer than 100 species were then scientifically described. But with the current journal article and studies by herself and others, the number has roughly doubled today. Electric fishes are of little commercial importance, but in her opinion fishes of the Neotropics, especially in the Amazon, are still "under studied" and more taxonomic studies such as the one are needed.

She adds, "As environmental changes affect rivers worldwide and in the Amazon region, freshwater fauna are under many different pressures. Fish populations are dwindling due to the pollution, climate change, the construction of hydroelectric plants and other factors that result in habitat loss and modification. As such the need to document the current fish fauna has become all the more pressing."