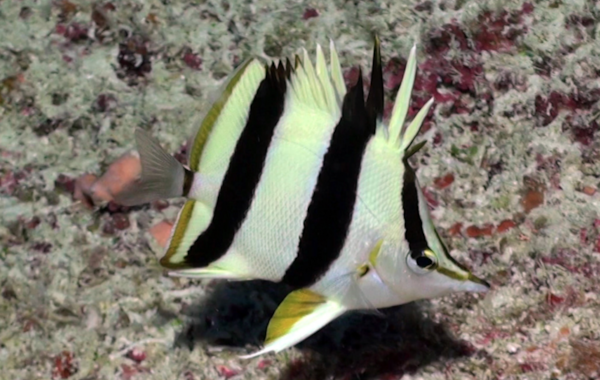 A new species of butterflyfish has been described from the Northwestern Hawaiian Islands.

A new species of butterflyfish has been described from the Northwestern Hawaiian Islands.

The new fish, Prognathodes basabei, was discovered in deep reefs of the Papahānaumokuākea Marine National Monument.

“Butterflyfish are the glamour fish of the coral reefs,” said Richard Pyle, Bishop Museum scientist and lead author on the study. “They are colourful, beautiful, and have been very well-studied worldwide. Finding a new species of butterflyfish is a rare event.”

Deep coral reefs at depths of 150 to 500 feet, also known as mesophotic coral ecosystems or “the coral-reef twilight zone,” are among the most poorly explored of all marine ecosystems. Deeper than most scuba divers can venture, and shallower than most submersible-based exploration, these reefs represent a new frontier for coral reef research.

Prognathodes basabei is named after Pete Basabe, a veteran local diver from Kona who, over the years, has assisted with the collection of reef fishes for numerous scientific studies and educational displays. Basabe, an experienced deep diver himself, was instrumental in providing support for the dives that produced the first specimen of the fish that now bears his name.

In addition to the specimens used for the published study, live specimens of the new butterflyfish are now on display at Bishop Museum in Honolulu, the Mokupāpapa Discovery Centre in Hilo, and in the Deep Reef exhibit at the Waikiki Aquarium, Hawaii.

The description of the new fish by scientists from Bishop Museum and NOAA, is published in Zookeys.