The goldfish societies are as active as ever this year, says Dr David Ford, and the first Open Show of the season saw some cracking fish.

The season started with the Association of Midland Goldfish Keepers AMGK holding its Open Show at the West Orchard Church Hall in Stivichall, Coventry on June 29.

No less than 30 classes (all goldfish) had entries from the AMGK and the following British goldfish clubs: Bristol Aquarist Society (BAS), Goldfish Society of Great Britain (GSGB ), North East Goldfish Society (NEGS) and Northern Goldfish and Pondkeepers Society (NGPS). All the members know each other and bring home-bred specimens to the traditional auction.

Thirty goldfish keepers attended that auction where AMGK Chairman Patrick Davies was the auctioneer, selling 25 goldfish varieties at an average price of only £5 each. Meanwhile judges from the five national clubs awarded the 214 Entries a First, Second or Third in each class.

The Best Exhibit Award went to Alan Ratcliffe of NGPS with his London Shubunkin. 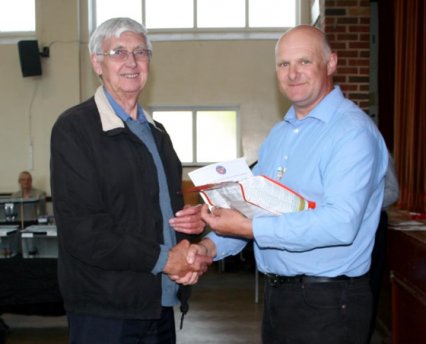 Here is Alan receiving the award from Andrew Barton, President of AMGK. And here is the winning fish... 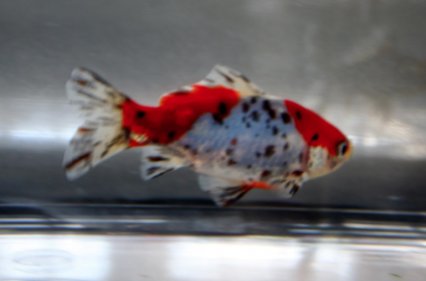 It is the blue coloration of this fish that wins top points, as well as the ideal shape for a 'London' breed of Shubunkin.

The other firsts show the amazing varieties of goldfish that these specialist breeders produce.... 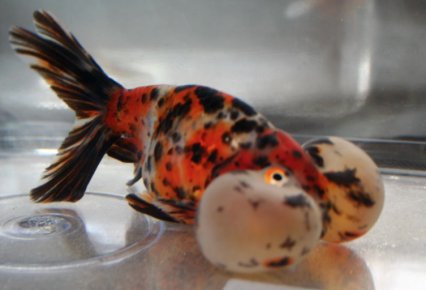 Nacreous Black Moor (pictured at the top of the page) 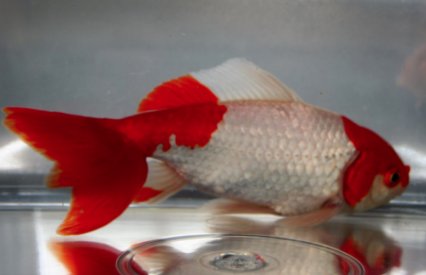 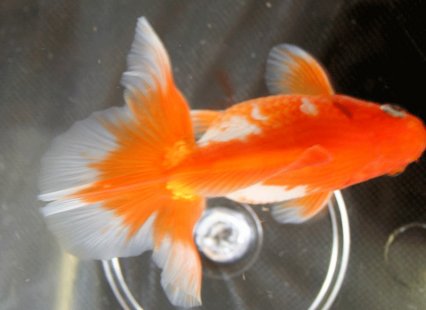 Tosakin (best viewed from above to reveal the beautiful tail structure).