Major shark and ray conservation project gets under way Fifteen-hour days, 22 manta rays tagged and 40 monitors installed across 130 km of sea bed: a team fof experts has revealed the progress made in its first expedition to Sudan to protect one of the ocean's most endangered species.

During a four-week mission to the Dungonab Bay Marine Park and offshore reefs at the end of last year, a group of scientists led by marine biologists, Nigel Hussey and Steven Kessel from the University of Windsor and Ocean Tracking Network (Canada), undertook state-of-the-art fieldwork to complete the first stage of a unique shark and ray conservation and management project.

It was the first time scientists have been deployed in the Sudanese Red Sea to help safeguard the future of the endangered manta ray, prepare the road for future missions on Sudan’s shark populations and support the development of marine protected areas.

A team of a dozen experts working with Equipe Cousteau and aquarists from The Deep, worked alongside local representatives of the Wildlife Conservation General Administration, The Red Sea State Government and local fishermen to successfully and humanely tag several manta rays with satellite, acoustic and GPS tags. 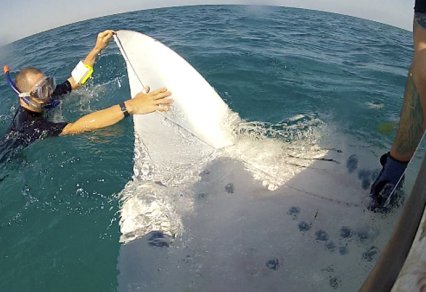 Monitoring the species will generate essential baseline information on the manta ray populations and produce the critical foundation block in establishing an effective conservation strategy to protect them. Manta rays are highly vulnerable, and are designated as a near-threatened species; populations grow very gradually and are slow to recover once depleted.

In this first mission, the team successfully tagged and released 22 manta rays (with a mix of acoustic and satellite tags). For the first time ever in the world, internal implantation of acoustic tags and dorsal fin attachments of satellite tags was used.

Tagged manta rays will be followed through an acoustic monitor array established during the mission. Satellite tags will allow the scientific team to track manta rays movements on a regional scale and genetic sampling of a large number of individuals will help to better understand species and population structure.

To date, the satellite-tagged manta rays have remained in a relatively small area within the boundaries of the Dungonab Marine Park, but have made larger movements to regions where they were not previously observed. This preliminary data suggest that Dungonab may be an effective marine park for the protection of this species and their daily movements will continue to be tracked for the next 10 months.

Initial genetic analyses have surprisingly shown that many of the manta rays could potentially be Giant mantas (M. birostris) rather than the Coastal manta (M. alfredi) as previously documented.

Ben Jones, Senior Aquarist at The Deep, said "We achieved everything we set out to do during this first leg including installing research equipment, studying manta rays and examining feeding sites. This is a monumental step forward in the conservation of this rare and endangered species and The Deep is proud to be a part of such a pioneering project.

"We are looking forward to returning later in the year to carry out essential maintenance of the ground-breaking technology and analyse initial results to help protect this important animal and the region." 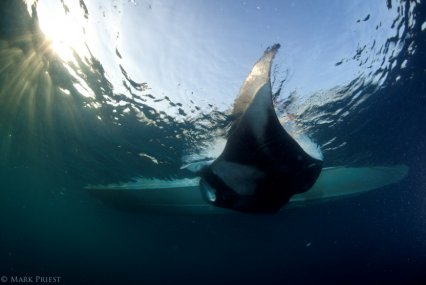 The expert team will return to Sudan once a year over the next four years to collect data on this key component of the world’s marine biodiversity on which little is known. A second field mission is planned for early 2013, focused on threatened shark species in the region, Grey Reef and Scalloped hammerhead sharks. Because certain sharks and ray species are facing global human threats, a success story in the Sudanese Red Sea provides a ray of hope for our better understanding and protection of these magnificent animals.

Tarik Chekchak, Director for Science and Environment at Equipe Cousteau said: "At the present time, it is extremely rare to hear reports that shark and ray populations in a given region are in good health. Sudan remains one of the unique global hotspots on earth where this statement holds true. But Sudan's shark and ray populations remain under threat from human impacts and could very quickly follow the way of other regional populations – from healthy to endangered in a matter of years.

"Their conservation and management is therefore of both a regional and a global priority. In addition, the project will have direct long-term benefits for the entire ecosystem on which this species depends and for the local people."

The manta ray conservation work in Sudan also involves institutions such as the Red Sea University, the Wildlife Administration, the King Abdullah University of Science and Technology, Regional Dive operators and other local stakeholders creating an exchange of skills and competencies to forge sustainability for management of marine resources. The information will also be utilised to initiate sustainable and regulated ecotourism related activities to benefit the local Sudanese population.