Illegal fish STILL on sale in the UK Illegal fish STILL on sale in the UK

Given the job that I do, I see a lot of fish shops in the UK. In fact, I probably see more shops than some sales reps do, or at the least over a much wider area.

Obviously I’ll see a massive variance in store quality. Impoverished areas will try to stretch what they have and what they can afford. Affluent areas may be brimming with livestock. However, I’m pleased to note that the overwhelming majority of stores that I visit, rich or poor, are entirely above board, legal, and responsible.

I adore this hobby. No, I’m passionate about this hobby. It’s what I’ve spent my life doing. It’s what my previous, current, and most likely future careers have been based around, and so to see a retailer behaving so irresponsibly is enough to flick me into a rage.

So when I stumbled across a store that has not one, but two species that are illegal in the UK, I had to take a closer look.

The first species I was no less than Myxocyprinus asiaticus, the Asian hi-fin shark (pictured above). These were legal in the UK years ago, many many years ago, but have subsequently been banned. They are still, today, very much illegal to sell or even to own in the UK.

This is a fish that can attain a huge size. Adults are found of over a metre in length, with weights of over 40kg. But what really makes the fish a problem is that it has no issues with colder water. It could quite happily overwinter in UK waters, and then it will breed, and then we have huge problems in native waterways.

There’s even the risk that the fish could be a vector for other illnesses, potentially a carrier of viruses that could blight UK cyprinid species.

It became evident that the staff in store knew something of the legalities involving this fish, as we were asked not to photograph them when we tried to. We got some pictures beforehand, however.

I was told that the store didn’t know what to do with them, that they knew it was a fish they weren’t supposed to have, that the fish had been rescued in, and that they were in limbo. This was fine until I pointed out that they had a price label on them, which rapidly came off. A retailer knew that the fish was not allowed, but still offered the fish for sale. 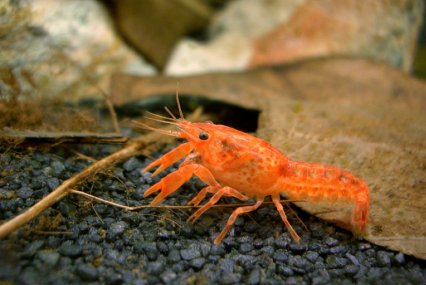 The second species noted was Cambarellus, the Orange crayfish (picture above by Veitw, Creative Commons). This one was admitted to having been bought in, but it was claimed that the legality issue wasn’t known regarding the species.

We’ve reported on the crayfish issue before, and so it’s a shame that I’m having to reiterate now – these species are illegal. They pose a potential threat to our native White clawed crayfish, and have been assessed and outlawed for a reason.

We attach pictures of both of these species for two reasons. The first is to discourage sales. If as a customer you buy either of these species, then shame on you. You’re fuelling an illegal trade, and you’re endangering the lives of native species. You have no place in this hobby.

The second reason is to ask that you, the responsible fishkeeper, remain vigilant to these species. If you see either, there are two things you can do. The first is to contact CEFAS and report what you have seen. The stocking of these fish carries a hefty fine, and that stands whether you’re selling them, or keeping them in your home tank. CEFAS will not be averse to taking these species away from you and destroying them – and you have no appeal against that decision. An email to the Fish health inspectorate at [email protected] will do the job.

The other thing you may wish to do is boycott the store until such fish have been removed from the premises.

Please keep eyes peeled for these species, everyone. This hobby already faces enough pressure from those that would see it ended. Let’s not give anyone ammunition to use against us.