How can we stop goldfish being given away as prizes? Tim Stoodley looks at the plight of the thousands of goldfish handed out as prizes at funfairs and carnivals every year, asks why the RSPCA is unable to prevent it happening and offers some possible solutions.

It's late April and the sunshine is beautiful. The conditions are perfect for a trip to Spalding's famous flower parade. We load the kids into the car and join the necessary queue of traffic heading towards one of the area's largest events. It's a picture perfect family day, we stumble around town and enjoy the festivities and then decide to end the day by visiting the fairground that is in town for the weekend.

Fantastic! A load of high, fast, noisy rides really get the adrenaline going. We've pumped the kids full of popcorn and candyfloss and spent far too much on rides nobody really enjoys!

So far the perfect day continues... wait! What's that? I swear that kid just walked past me with a goldfish in a bag! Must be this sunshine getting to me, or maybe I left my brains on the waltzer! Hold on, there is another one,  and another, that one is being swung round in its little bag by a child no older than two, definitely not old enough to be transporting a fish. Why would people visit the fair on the way home from their local aquatics shop?

Ah, here's the problem, a coconut shy 'win a prize every time'. Hmm, seems fair for £5! Wait, the loser's prize is a goldfish! Oh my God! There are literally hundreds of the them in tiny little bags, not big enough for a sandwich. Hundreds of them. Hundreds of people also 'winning' them as they lose on the sure-to-be-fixed sideshow.

Oh look, you can buy a bowl for them... just £9.99! No sign of water conditioner or advice though.

Maybe the friendly looking stall worker will be able to offer some advice. I tell my other half to guard the kids while I pretend to know nothing about the goldfish I'm about to 'win'. Sure enough, I cannot hit the coconuts and get a goldfish rammed in my face – I didn't even get asked if I wanted it!

I asked the lady if I could I get some advice on them. 'Go to the library' is her response.

'How long will they live?' I enquire while she is trying to roll up more business. 'Few weeks normally' she snaps. So there I am, with a goldfish I have no home for, have no idea how to keep and what's more I still have nine more rides to go on.

Luckily, the little goldfish was quickly transported back to my fish house where it is now enjoying a 12' indoor pond. However, many more of his siblings wouldn't have been so lucky. Indeed, on my way out of the fair I noticed one dead goldfish on the floor – the bag had apparently been dropped and its contents sprawled on the footpath – and I also came across one dead, in its bag, in a dustbin.

Furthermore, I witnessed several goldfish being clung onto while their new owners enjoyed the big wheel, the waltzers and other fast rides certainly not suitable for a goldfish. 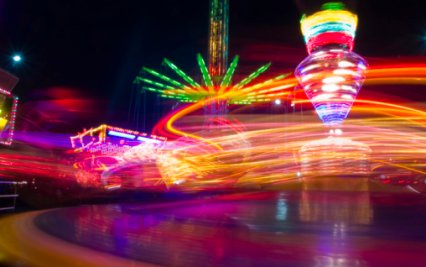 I came home feeling sick to the stomach. I was literally so angry that my partner quickly ushered the children off to the local park to prevent them from witnessing my outrage.

I am not naive, I knew full well that this particular fair, Roger Tuby and Sons, gave out goldfish as prizes. I knew this because I witnessed the same thing last year and the year before. However, naive or not, this cannot go on.

I've read today in a red-top newspaper that a man has been arrested for singing 'everybody was kung fu fighting' in front of an Asian couple. It is worth pointing out he was singing on stage to a large audience, not directly at the couple. How is it that we are policed to such an extent yet everybody stands by while these goldfish are given no option or hope of survival?

The problem isn't just found at the attitude of fair-going customers. Lots of families with young children still visit pet stores to buy a 'nemo' and stick it in a bowl. Unfortunately, only the most astute, moral-minded shops will refuse these sales. Literally thousands of fish are being given to people with no knowledge of how to keep them, or even a home for them in the first place. It's no wonder the fair workers believe they only live a few weeks.

The question I pose now is how is this different to me turning up at the busy flower parade and beating dogs to their death in front of happy, delightful customers? If I were to even attempt this I would be branded, quite rightly so, a monster. I'd no doubt end up in the paper and on the news as the ogre who mistreats animals.

I don't blame the carnival workers, they only supply the demand and most don't know better. I struggle not to but I don't really even blame the people who take them as prizes. They give in to the peer pressure of their children, which any parent will know is a daunting task.

Instead I blame two things: society as a whole who still, in this age, think it is OK to treat fish in general as second class citizens of the animal world.

Secondly, I blame the ministers who passed the Animal Welfare Act (2005). Originally this Act banned all animals as prizes. However, at the last moment it got amended to simply raise the age of winning a pet as a prize from 12 to 16 without parental consent. Without stereotyping, are a group of 16-year-olds responsible enough to win a goldfish at a fair? No. I can only imagine what fates some of those poor little fish, and indeed fish all over the world at carnivals and fairs, have suffered. 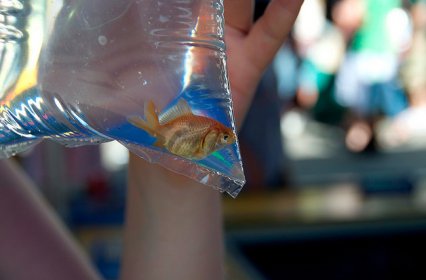 So, what's the answer I hear you ask? It's all good and well me ranting and raving at the people who actually care about these animals. You're the wrong people to preach to. However, I call upon you all to work together and bring what seems to be common sense in 2011 to the table. Would the trip to the fair be any less entertaining or exciting if fish weren't the prize? Of course not.

The instant reaction at this point for many people is to blame the authorities for letting this happen. It is worth pointing out though that the police and the RSPCA can only act on law. I had a chat with RSPCA Inspector Justin Stubbs to get a viewpoint from the people trying to help, but yet powerless to do anything.

Why can't the RSPCA stop fairs giving away fish as prizes?

"The Animal Welfare Act 2006 in England and Wales makes it an offence to give away an animal as a prize if the person can reasonably be believed to be under 16 and is not accompanied by an adult (there are some exceptions in sections 11(3)-(6) of the Act). This is not the case in Scotland, where under the Animal Health and Welfare (Scotland) Act 2006, it is an offence to offer or give an animal to another person as a prize (whatever their age), except where it is offered in a family context.

"This means we cannot prevent fish being given away as prizes, we can only stop under 16's from receiving them. Unfortunately, we cannot make laws, only help to enforce them."

What can the aquatics world do in the future to stop this practise occurring? How would we get this outlawed?

"Some councils license fairgrounds, and the things they can and can't do there. Changing the law under the current government to 'stop giving fish as prizes' realistically, won't happen. The RSPCA is opposed to giving any animal as a prize. Maybe lobbying individual councils into adding a caveat to their license, that no animals should be involved could work? If it was illegal to give fish away as prizes, it would be reasonable to expect the fairgrounds to start giving away other animals."

Why did the Animal Welfare Act get amended to exclude giving away fish as prizes?

"In the consultations, the RSPCA and other groups lobbied hard to have all animals as prizes stopped. It's not just fish that can be given away, pretty much any animal can be. Unfortunately,  pressure from the fairground owners and other organisations prevailed and hence the only change was the change in age limit."

This goes to show that the one authority able to help has its hands tied by the laws they must enforce. It is the ministers who must act now and stop this barbaric practice. I see three possible solutions to this problem:

Firstly, we petition the government together to ban the transfer of ownership of a fish as a prize. However, as Mr. Stubbs from the RSPCA mentions above this would only pave the way for another animal to suffer a poor fate.

Secondly, we could possibly lobby local authorities to introduce a code of conduct within their licensing laws. Currently, any fair or carnival must be licensed by the local authority. Therefore, if the local council make it difficult for them obtain this license while giving away fish as prizes, then the fair owners are less likely to offer this attraction.

Thirdly, we could try to offer the carnival or fair owners the option of agreeing to a voluntary code of practice. This would include things such as offering advice with every fish, selling good sizes tanks at realistic prices and making sure the fish are appropriately  housed while at the fair. Thereafter any fair or carnival failing to adhere to this code of conduct can be well published as a 'non-animal friendly fair' by us and fellow animal lovers, therefore damaging their reputation and credibility.

All three options are viable and will only serve towards helping these poor victims of the carnival industry. It can only be right that we act now and work towards a brighter future for these poor goldfish who have no hope or prospect.

We spend thousands of pounds a year on our beloved aquatic pets, normally just a handful of fish, now let's get together and save the thousands of goldfish who are unlucky enough to be shipped into this trade of terror.