A Chinese couple arrived home from work to find their house had been ransacked â€” and there was something rather fishy about the culprit!

Xu Xianmin and his wife thought at first that their home had been burgled, with tables overturned and a stack of plastic bottles all over the floor. However, all the doors and windows remained locked and closed.

Xu said: "When I was picking up things from the other side of the table, I suddenly touched something cold and slippery, and it was moving!" 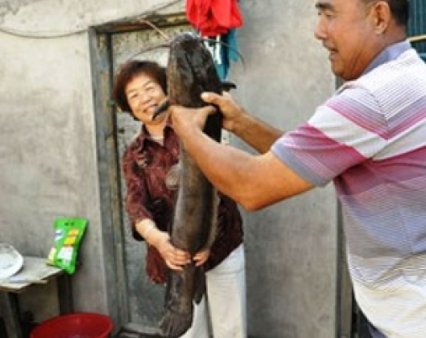 The intruder turned out to be a catfish, which is thought to have got into the couple's home when they opened the door before leaving for work in the early hours of the morning.

An aquatic expert said that the fish would be able to survive for quite a long period out of water, but the mystery deepens — the couple live in a residential area of Changji, Xinjiang Province, nowhere near any rivers or ponds.

So just how did the fish get there? An explanation hasn't been found so far.

We're not of the actual ID of the fish concerned, but looking at the picture we think it could be one of the larger species of Clarias, known for their 'walking' abilities and able to survive for long periods out of water.