Fish attacks man? Surely not. But there are plenty such incidents in the PFK news archives. Sometimes these events are accidental, others are self-inflicted and - it has to be said - some are truly bizarre.

A 29-year-old man was left with the 'beak' of a needlefish stuck in his face after it leapt from the sea and impaled him below the nose.

Experts from the Department of Otolarynology at Israel's Meir Medical Centre in Kfar Saba said that the man was admitted to the hospital after the fish hit him in the face, and left its toothy jaws wedged in the hole. The fish apparently leapt from the sea and impaled the man at the side of the nose. Its jaws hit with such force that they pierced his naval cavity, went through his maxillary sinus and stopped just short of the wall of his eye socket.

A teenager was left with more than 50 stitches in her arm after a four foot barracuda, like the one pictured above, leapt onto the family yacht and attacked her, fastening its teeth onto her arm. After letting go, the fish fell on its side to the floor, where her dad killed it by stabbing it with a fillet knife.

The attack, which left the teenager with bite marks stretching from her wrist to her elbow, happened near Venice, Florida.

Practical Fishkeeping also reported a story of an angler attacked by a leaping barracuda in 2006.

A leaping Silver carp broke the jaw of an American teenager, covering him in fish blood and guts in the process.

Fifteen-year old Seth Russell was floating down Lake Chicot in southeastern Arkansas on an inner tube being towed by a boat when a leaping Silver carp (Hypophthalmichthys molitrix) knocked him in the face, rendering him unconscious.

The injured teen required oral surgery to wire several teeth together and still experiences back pain that doctors attribute to whiplash from the high-speed collision.

A fisherman was impaled in the chest by a 14' Blue marlin, the force of which knocked him off his boat and into the sea. The incident happened while Ian Card was fishing in a International big game fishing tournament off Bermuda.

The 360kg/800lb fish hit him with such force that its 90cm/3' long sword-like bill went through his chest, just below the collarbone, and threw him into the sea, still attached to the bill of the fish.

The fish swam down, forcing Card further under the water, but he managed to push himself off the sword and swam to the surface. He later recovered in hospital. 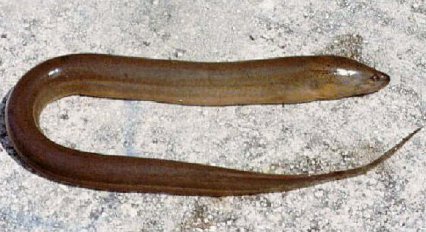 How did that get there?

A man died after a live eel was inserted into his bottom for a joke. The 59-year-old chef from Sichuan in China had apparently passed out after a heavy bout of drinking and friends inserted a 50cm Asian swamp eel, like the one above, into his rectum for a bit of fun.

Eels are not the only fish to have been removed from patients.

Doctors treating a 14-year-old boy from India were shocked to find a 2cm-long fish had "slipped" up his penis and into his bladder.

The patient, who was admitted to hospital with complaints of pain, dribbling urine and acute urinary retention spanning a 24-hour period, gave an interesting explanation. He claimed that he was cleaning the fish tank in his house, and while he was holding a fish in his hand, he went to the toilet to pass urine. He said it was then that the fish slipped from his hand and entered his urethra.

The fish that was later removed was believed to be a small member of the Betta genus, measured 2cm long and 1.5cm wide.

All of the people affected had eaten Amberjack, carangid marine fishes from the genus Seriola, and were treated in hospital after suffering from Ciguatera poisoning.

Ciguatera is caused by ciguatoxin, a poison that accumulates in the tissues of predatory marine fishes that have consumed other fishes carrying the toxin which they in turn accumulated through ingesting a microalgae called Gambierdiscus toxicus.

The fish consumed by the men was a member of the Sparidae family and is commonly known as the Salema porgy.

Ichthyoallyeinotoxism, or hallucinogenic fish poisoning, is caused by eating the heads or body parts of certain species of herbivorous fish and has previously only been recorded from the Indo Pacific.

Hospitals in Russia's far-eastern city of Vladivostok have seen an influx of patients after hungry anglers used fugu to make a tasty fish soup. Some people died.

Just one fish contains a poison capable of killing over 30 people. In Japan, only very experienced, specially trained cooks are allowed to dress fugu.

Fugu fish are not usually found off Vladivostok, but the warm summer saw their numbers grow.

Fugu has been responsible for a number of other deaths and hospitalisations over recent years.

Seven elderly men in the Japanese town of Tsuruoka (350 km north of Tokyo) were hospitalised with tetrodotoxin poisoning after consuming raw puffer and grilled puffer testicles.

They complained of numbness in the hands and legs - classic signs of tetrodotoxin poisoning - after consuming the fish prepared by an unauthorised chef.

The restaurant was unlicensed to prepare and serve puffer and the owners were questioned by police on suspicion of professional negligence resulting in injuries. 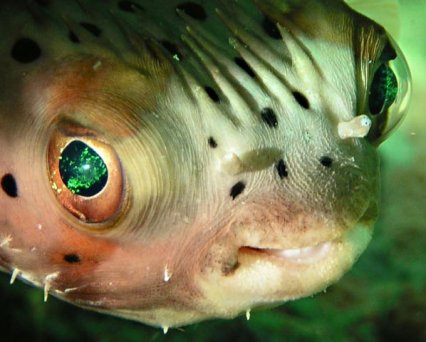 Puffers, like the one above, can cause injuries, too.

A Cambodian boy was attacked by an enraged puffer fish which sank its 'teeth' into  his scrotum. The 13-year-old was left in a hospital bed with heavy strapping around his testicles. The boy's father said the fish had accidentally become trapped in the boy's net and attacked him when it was freed.

The victim, from Prek Pneuv commune outside Phnom Penh, was expected to recover, but the extent of the damage had yet to be determined.

A teenager swimming in a lake near Cairo choked to death on a fish that swam into his mouth.

Eighteen-year-old Yasser Ahmad Hussein was swimming in Lake Qaroun in Egypt. Paramedics were unable to resuscitate Hussein, who had died before he reached the hospital.

In 2005, an eight-year-old boy choked to death after a 7cm Climbing perch he had caught jumped into his mouth.

When a fish is the victim...

And last, but not least there's the very sad case of a Siamese fighter used in a love battle by a man in Portland, US. Horrifying, but in a different sense to the stories above. The report appeared in The Guardian.

According to court records, Sarah Harris had broken up with Fite but returned to her Portland apartment to find him lying on her bed, saying he wanted to get back together.

Harris fled but later returned with an officer to find her fish, a purple fighter named 'DeLorean' on the wooden floor with a knife through him.

Prosecutor Eric Zimmerman told the Judge that Harris plans to get a memorial tattoo of the fish and wanted Fite to pay for it. But the Judge declined to make Fite pay restitution for the tattoo.

The judge ordered Fite to stay away from Harris, but said that he could still have contact with fish...