A $15,000 reward has been offered for information leading to the arrest and conviction of three vandals who entered Devils Hole in Death Valley National Park in Nevada on the evening of April 30, leaving one of only 115 remaining Devils Hole pupfish dead.

The National Park Service (NPS) has offered the reward and an investigation has been launched after three men drove an OHV (off-highway vehicle) around a secured gate at the Devils Hole parking lot at around 7.20pm on April 30. The men shot signs, the locks on two gates, and a motion sensor on the security system, discharging a firearm at least 10 times. One of the men swam in Devils Hole and left his boxer shorts behind in the water. The men littered the site with beer cans and vomit.

Park employees found the dead fish and vandalised site on Monday. A post mortem is being performed on the pupfish to determine whether the vandals' actions may have caused its death.

The Devils Hole pupfish (Cyprinodon diabolis) has been described as the world's rarest fish and is on the IUCN Red List of Endangered Species.

The NPS says: "Although the men attempted to dismantle the security system by shooting a motion sensor and removing cables from two cameras, parts of the system continued to function during their entire time at Devils Hole. 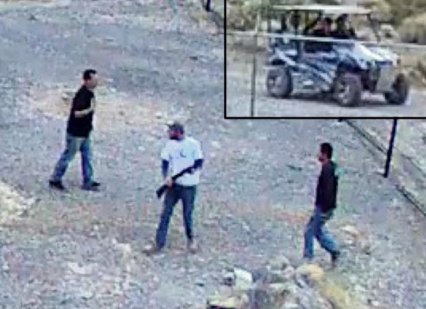 "Video cameras recorded the men climbing over the fence and driving away in the direction of Crystal. The involved OHV may have been a blue Yamaha Rhino, extensively customised with an added seat and safety cage

"ISB Special Agents are working with investigators of the US Fish and Wildlife Service and Nye County Sheriff's Office on this case. If you can help identify those responsible or have other information about this incident, please contact us. You don't have to tell us who you are, but please tell us what you know."