For five years 13 year-old Hannele Cox has been battling with an invasive bacterial infection she caught when cleaning her tank.

Having placed her hand in the tank, Hannele caught her hand and cut it.  As any of us would, Hannele thought little of the wound, though her hand was swollen, until it later started ‘oozing’ and her mother, Amy, took her to the doctor.

She was prescribed antibiotics, but to no avail; her mother then decided to take her to a dermatologist where they discovered the cut was infected with Mycobacterium marinum – or fish tank granuloma.

Despite visiting numerous specialists, none have managed to find a cure and Hannele’s family fear her hand may have to be amputated, which for sports enthusiast Hannele, is devastating, but there appears to be very little other option.  “I just want to be done with the pain,” she says, speaking to a Los Angeles reporter. “I’ve been in pain for five years.”

There is some small hope, however as the family have found a doctor in Colorado who may be able to help. 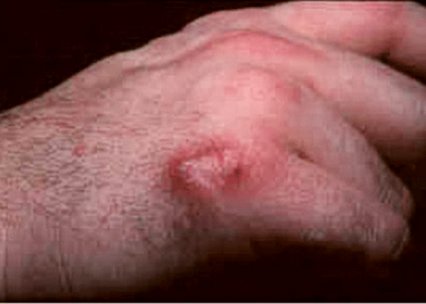 Although the bacteria is not contagious, it does cause skin lesions similar to those pictured above (photo by Robert Fenner) and eats into tissue and even bone.

Hannele is to go through her third bout of surgery to remove infected tissue and doctors are hoping to get a better look at the infected bone.

The tank which caused the infection contained only a few tetras and the family were unaware that it was contaminated with Mycobacterium marinum.

It is very rare for the bacteria to affect humans, and is usually picked up from fish or aquariums that have experienced tuberculosis.

You can see a news report on the video below: