A French designer has developed a self-sustaining tank, allowing owners to harvest fresh fish and vegetables in their own home.

The tank, known as Local River, relies on aquaponics and combines aquaculture with hydroponics to create a symbiotic system.

Miniature vegetable patches float on the tank with the plants getting nutrients from the nitrogen-rich waste produced by the fish. This, in turn, acts as a natural filter and maintains conditions for the fish to survive. 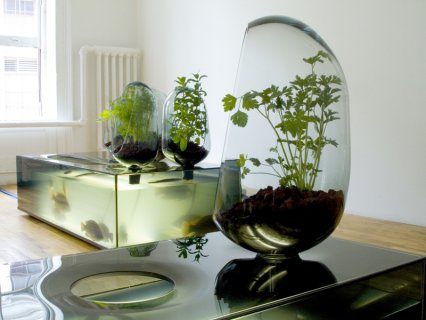 The concept is based on larger scale aquaponics and fish farms from the Far East that raise tilapia with trays of lettuce floating on the ponds.
Mathieu Lehanneur, the designer, has said: "Local River aims to replace the decorative 'TV aquarium' by an equally decorative but also functional 'refrigerator-aquarium'." The fish and plants live together and ultimately end up as fresh produce for the keeper. 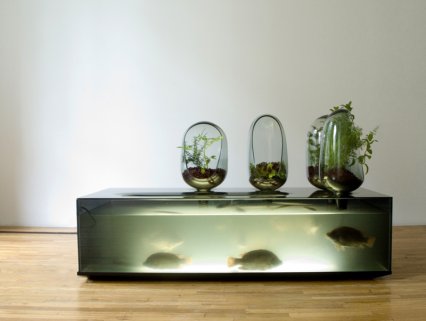 Lehanneur claims freshwater fish such as eels, perch, trout and carp, would be kept in the tank and he predicts a return to farm-raised freshwater fish as food rather than saltwater species.
The French designer is one of a group of designers to have designed a 'Domestic Pond' which works on a similar idea. The 'pond', Fontaine, works on a simple cycle: water from the aquarium is filtered by sand before flowing into plants, with the plants purifying the water before its return to the aquarium.
The Local River is a costly addition to the home kitchen, costing £6,750 for the smaller model (29x18x36 inches) or £10,600 for the larger (64x29x39 inches).
Looking at the images, the water condition appears murky which may be expected given that the only filtering comes from the floating plants.