Over 2000 fishkeepers and hobbyists, many who queued from 8am, attended the opening of Fishkeeper Scotland’s new flagship store in Edinburgh on September 3–4.

The new store, at Dobbies Melville, is the company’s second in Edinburgh, and its ninth in Scotland. The open event raised funds for two charities close to the hearts of staff — the Sick Kids Hospital and the SSPCA. There was an official ribbon cutting ceremony, goody bags for the first 70 customers, kids’ face painting, a celebratory 2ft ‘Golden nugget’ fish cake, a Forth 1 radio roadshow with DJ Mark Martin and various competitions, discounts and offers.

The new store has been given a complete revamp since taking over the Dobbies aquatic concession and now stocks over 5,000 tropical freshwater, marine, coldwater and pondfish, along with invertebrates. It also features a 6,500 l Koi pond, where visitors can feed the fish.

Colin Christian, Fishkeeper Scotland’s Regional Director, said: “The feedback already received has been hugely positive not only on the layout and increased stock but also on the unusual and rare species that are now available, many of which have never been seen in Scotland.

“I’m confident the new store will continue to be a huge hit with customers who are in great hands with the fantastic team we have on board — all are fishkeepers with incredible knowledge and experience in everything aquatic and who have done a great job getting the store ready in time for our big weekend.

“This is part of a major store roll-out plan which we are really excited about and on track to complete within the next 12 months, taking our total number of stores in Scotland to 14,” he added. 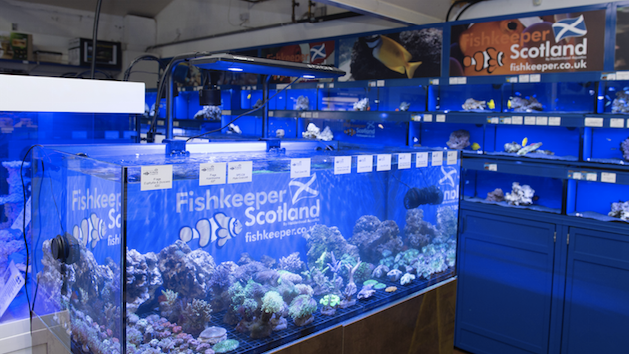 The Melville aquatic store has been given a complete revamp since being taken over by Fishkeeper Scotland.

The new store also stocks a wide range dry goods and offers a choice of over 200 aquariums, including the company’s own AquaOak range.

Fishkeeper Scotland is an independently operated arm of Maidenhead Aquatics.