In the same mould as the private jet, Bentley or villa, the aquarium is the new status symbol. Nicolette Craig tries to discover why the A-listers now covet fish and water.

Keeping an aquarium wasn’t always the coolest of hobbies — but in the last 10 years or so a showpiece fish tank has become one extravagant way of illustrating your wealth.

Justin Muir owns and runs City Aquarium in New York, creating high quality aquariums for clients around the US. When I contacted him he had just designed for Ben Affleck and Jennifer Garner and was busy filming for TV shows.

Such tanks may seem a waste of money, but have become the ultimate status symbol for the few. The media has criticised celebrities who spend their money on fish tanks, but many are genuine enthusiasts. There are those with a lot of money to devote to their tanks, but whether they choose to do so on the basis of whether it matches their latest outfit or not is another matter… 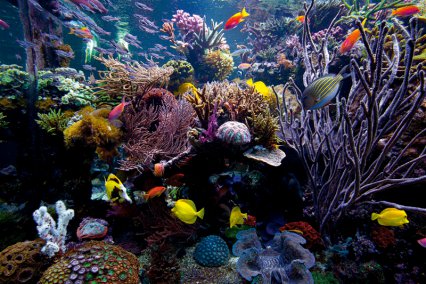 Businessman David Saxby has what many consider to be the ultimate reef tank. His system holds around 13,640 l/3,000 gallons and more than 400 fish. There's a video of his set-up below:

He said: "Hobbyists tend to fall into four categories; those who want fish for their children, people who like fish and want tropical tanks for their natural beauty; extreme hobbyists, such as myself, keen to take a certain aspect of the hobby further — and people who choose tanks purely as decoration with little or no care for the fish."

David became an enthusiast at 31 after reading a book by Dr Elizabeth Woods claiming that SPS corals couldn’t be kept in captivity. He has since developed a huge range of products, through his company D-D the Aquarium Solution, which have enabled him and many others to do just that. 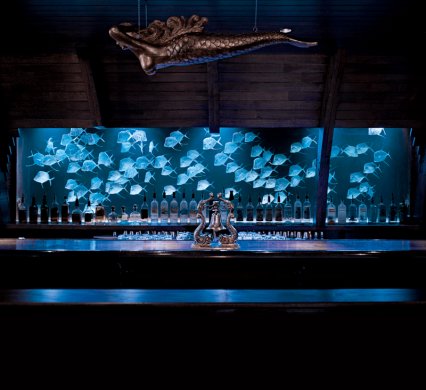 So who are the celebs getting a kick out of fishkeeping?
Stephen Ireland, the Newcastle United footballer, hit the headlines with a tank that reportedly cost £100,000 — but in reality cost far more. Contrary to popular belief, Stephen is said to be a huge reef enthusiast. His tank is pictured at the top of the page and there's also a video.

England captain John Terry has his own aquarium and is also a keen fish enthusiast, even appearing on the front page of Angling Times — one of PFK’s sister publications.

Hip-hop star Nelly was featured on MTV Cribs with four aquariums, including one with Lake Malawi cichlids, Nurse sharks and Tiger barbs — thankfully not all together.

Singers Ice-T and Wyclef Jean and motorcycle customiser Jesse James are all said to have a passion for reef tanks, in particular sharks. Wyclef is rumoured to have a shark tank in his car!

Ex-boxer Nigel Benn, comedian Les Dennis, actor Brian Blessed, ex new romantic’ singer Adam Ant, Latino pop singer Gloria Estefan and Playboy chief Hugh Hefner have all been avid Koi keepers. Pop guru Pete Waterman is a big fan of Koi, reportedly spending more than £150,000 in the 1990s on breeding them in Japan. Comedian Jim Davidson’s house featured the largest filtered Koi pond in the country, with £300,000 worth of fish, until he sold it in 2004.

TV show host Andrea McLean  and designers Oliver Heath, Lawrence Llewellyn Bowen and  TV DIY team leader Nick Knowles all own BiOrb nano aquariums. The Life Collection, in gloss black, red and white, has been dubbed by Oliver as ‘the aquarium of the iPod generation’. 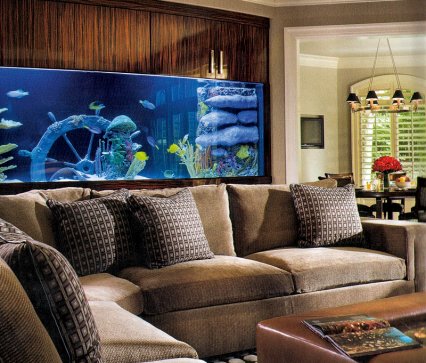 Expert Q and A
Justin Muir is founder and chief designer of City Aquarium, a US-based company specialising in high-end aquariums that are simply works of art. He created the above aquarium for US baseball star C C Sabathia.

Can you tell us more about the tanks you design?
I design aquariums for special clients or do projects worldwide, doing some 50 installations a year. Clients tend to be celebrities and high-weath individuals, as installations typically cost $25,000-$100,000/£15,000-£60,000. We also do larger installations for events, museums or TV and for movies such as Men in Black 3.

How did you come to this line of work?
I have a marine biology and environmental background and my family is related to John Muir, a famous American environmental pioneer.

I started on conservation projects and reef restoration. I then got my Masters degree in aquaculture and built eel and shrimp farms. This is where I learned how to build life support and aquatic mechanical systems.

I moved to New York in 2000, started my business and studied architecture and interior design along with furniture design. My design experience is really over the past ten years, but I consult with some of the best interior designers worldwide.

Where do you get your inspiration?
Most from the natural environment. I dive often and many of my new reef designs will come from images that I took while doing so. Those designs will display living Vase sponges and gorgonian forests.

Have you designed any particularly unusual tanks?
I designed a $37,000/£23,000 freshwater aquarium for former US banker and race car driver Alan Wilzig. His wife couldn’t decide on a colour scheme, so we based it around crystals with LED lights that can turn the fish one of 64 colours.