The first hybrid Manta ray has been identified off the Red Sea coast of Sudan.

The discovery was made following a pioneering research trip in late 2012 carried out by scientists from The Cousteau Society, The Deep and The University of Windsor in collaboration with Sudan’s Wildlife Conservation General Administration, The Red Sea University and The Red Sea State Government.

In a few locations, the Giant Manta ray and the Reef Manta ray occur together, but these species typically exhibit different habitat use and movement patterns and were thought to be reproductively isolated.

Hybridisation among species carries serious implications for estimating population connectivity and identifying critical habitat for Mantas. This is only the second documented case of hybridisation in Elasmobranchs (sharks and rays), but using molecular genetic technologies we may find that hybridisation is more widespread than previously thought.

Little is known about the movements and populations sizes of Manta rays in the region. These animals are a symbol of freedom in the oceans and typically live for over 20 years and are slow to reach sexual maturity.

Their inherent inquisitive nature with humans and boats makes them particularly susceptible to fisherman and they are easily targeted due to their large size, slow speed and tendency to aggregate in shallow water coastal areas. 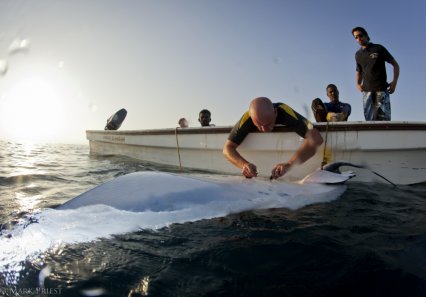 During October and November 2012, the expert team of international researchers and Sudanese partners conducted state-of-the-art fieldwork in the Dungonab Bay Marine Park and on the offshore coral reefs of Sudan, to study the iconic and vulnerable species of Manta ray and to prepare the road for future missions focused on Sudan’s spectacular shark populations.

The overall research programme aims to address critical issues to conserve Sudan’s unique Manta ray population and establish a long term action plan which can be followed by future generations. Both species are labeled as vulnerable on the IUCN Red List and have recently been listed on the CITES appendix II list following concern over increasing global exploitation rates.

The occurrence of hybridisation further stresses the importance for monitoring, conservation and management of threatened species, which are the principal objectives of this programme.