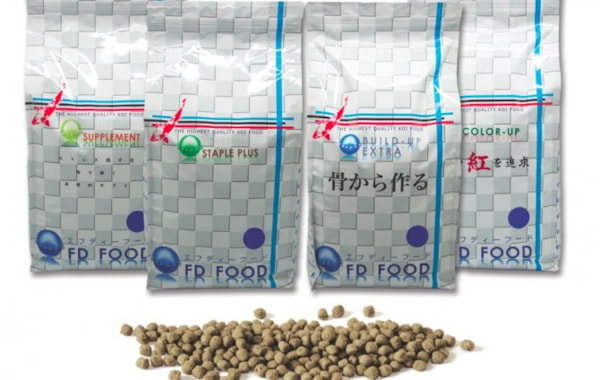 Evolution Aqua has announced that it will be distributing the premier, Japanese manufactured, Koi food range from the FD Food Company.

Four types of FD Foods will be available from Evolution Aqua stockists: Build Up Extra, Supplement, Staple Plus and Colour-Up.

The FD Food Company is owned and run by Mr Kentaro Baba, or Kenny to his friends. Kenny’s father founded Hikari, and from the age of 14 Kenny worked in many departments there from manufacturing to product development. Kenny now runs his own fish food venture — FD — with its sole aim being to produce the best possible fish food to feed to high end Koi.

FD Foods use only the highest possible ingredients sourced specifically by Kenny himself — a task that taken him all over the world. To select the best fish meal, Kenny visited fish suppliers in Russia, Iceland, Alaska and South Africa. He eventually found what he was looking for, a fish called Hoki, which is found in the oceans between New Zealand and Tasmania — some of the cleanest seas in the World. This process is repeated for all the ingredients used. The Spirulina in Colour-up is sourced in Mexico, for example.

Once formulated, the FD Foods philosophy is also to ensure that the foods are thoroughly tried and tested. During the testing phase, Kenny worked closely with the best Koi breeders to develop his range of foods, setting up research facilities in the South of Japan, where Koi breeders such as Dainichi sent some of their best Koi to be tested on.

A facility with 6 million fish was used to help develop the foods further. Kenny spent three years feeding his food to top quality Koi on the Koi Farms of Japan, and over 40 of the top Koi Farms have given feedback on the development of FD Foods, including Momantaro, Dainichi, Matsue, and many others. Some of their best fish were included in the food trials.

This relationship with the top breeders and their fish means that the highest possible quality must be maintained at all times, but also with their invaluable feedback, recipes can be adapted and improved where necessary.

When asked what the secret of FD Foods is, Kenny is clear in his answer. It is the quality of the ingredients that make the difference.